The Town Hall meeting on flooding 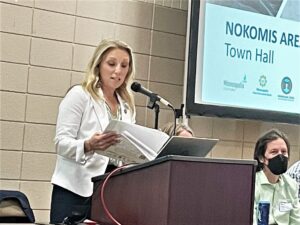 Emily Koski, council member from Ward 11, hosted a Town Hall meeting Tuesday, May 31, to discuss water issues for the homes around Lake Nokomis. The beautifully printed, 12-page program brochure said 21 property owners around Lake Nokomis “complained” of wet basements, sinkholes and saturated soil during the wettest seven years on record, from 2011 to 2019.
“Complained?”
To whom did they complain?
We don’t know. The brochure didn’t say.
But Emily Koski heard them. And she got the city to listen. And the county and the Park Board. And lots of other government agencies. And she got some people from the Minnehaha Creek Watershed District to write a 111-page very scientific analysis of the soil in the area around Lake Nokomis. And she arranged this dramatic Town Hall meeting at the Lake Nokomis Community Center.
Over a hundred people came to the meeting. And 17 experts were sitting behind tables spanning the width of the auditorium. And they all had the same sad story. It’s climate change. There’s nothing we can do about the dramatic increase in rainfall. So much rain, and it just sits there and won’t go away. We’re all doomed because of climate change and our addiction to oil. And it all began to feel like a scene from “Don’t Look Up.” And Emily Koski began to look like Meryl Streep as President Orlean.
What did these experts say we should do about it?
They recommended homeowners get flood insurance, waterproof their basements and get a sump pump to get rid of the water.
Someone asked if the Park Board is genuinely concerned about the excess water coming down the creek to Lake Nokomis and Lake Hiawatha, then why did Michael Schroeder, the Assistant Superintendent for Planning and an Edina resident, just recently recommend that the Park Board let the excess water from Edina ponds flow into Minnehaha Creek and into the flood plain of Lake Nokomis and Lake Hiawatha? 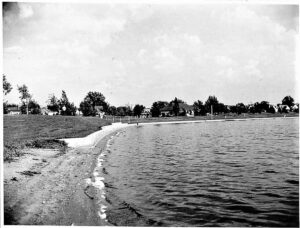 Lake Hiawatha, 1940. Steve Skaar commented on the Nokomis History Facebook page: “This photo shows you how Lake Hiawatha looked for years until they installed the weir in the late ‘60s at 27th Avenue South and Minnehaha Creek. That weir artificially raised the level of both Hiawatha and Lake Nokomis some four feet and led to many other problems in the area that nearby neighbors are experiencing today.”

I asked whether removal of the dam/weir at 27th Avenue (and other obstructions) would lower the level of Lake Hiawatha and the surrounding groundwater by five feet and, consequently, improve drainage of the peat soil surrounding Lake Nokomis and help alleviate flooding problems that happen during periods of heavy rains.
Someone representing the Park Board answered that the study was not looking at that question.
I responded by saying the dam/weir at 27th Avenue holds back five feet of water. That water has saturated the peat soil around Lake Hiawatha, and since that peat soil is connected to the peat soil around Lake Nokomis, and since water likes to run downhill, and if there’s no place for the water to go since the water table keeps rising, then doesn’t it make sense to pull the plug on this overflowing bathtub?
The Minnesota Department of Natural Resources says, “Federally-owned dams and dams determined by the DNR to be non-hazardous are exempt from the dam safety rules. Dams not subject to the dam safety rules will still require state and federal permits if they involve filling of public waters or wetlands.” The dam/weir at 27th Avenue is definitely filling in the public water of Lake Hiawatha and the surrounding wetland, but when we asked, the DNR could not find any evidence that the Park Board has a permit to do so.
They did find evidence of the rejection of a permit to build a pumping station near the dam/weir in 1969 (see sidebar). The permit was denied by the Department of Conservation (the predecessor of the DNR) because sanitary sewer lines were obstructing water flowing out of Lake Hiawatha. They could find no permit for the sewer lines: “As you undoubtedly know, all construction projects and utility crossings which encroach upon and otherwise affect public waters of the state require a permit from the Commissioner of Conservation. Projects which affect the outlet control of lakes are especially critical.”
So the dam/weir and the sanitary sewer lines are illegal. They require a permit to obstruct the outlet from Lake Hiawatha, and there is no evidence that they even applied for a permit.
What are the options for people concerned about the flooding of homes around Lake Nokomis and Lake Hiawatha?
The Park Board should take down the dam/weir. If they won’t take it down, then citizens should file a Writ of Mandamus lawsuit against the Park Board ordering them to either comply with the law and get a permit to flood the wetlands surrounding Lake Hiawatha and Lake Nokomis or take down their dam/weir.
The Minnesota Pollution Control Agency has legal responsibility for sewer lines in Minnesota. They should be contacted and informed that their sewer lines are obstructing the flow of water out of Lake Hiawatha. They need to either get a permit to flood the area or support the sewer lines and dredge under the pipes to allow Minnehaha Creek to flow naturally. If they refuse, then citizens should file a Writ of Mandamus to order them to act.
I have a consistently failing batting record with Writ of Mandamus lawsuits. I’ve lost every one of them.
More than 30 years ago I sued the City of Minneapolis to force it to have a referendum (as the City Charter requires) on whether to give millions of dollars to LSGI to build a department store downtown. The lawsuit was declared moot when the city suddenly stopped planning the giveaway.
In 2008 I sued the Hennepin County Attorney to force him to arrest George Bush when he stepped off the airplane to attend the Republican Convention in St. Paul for the killing of Minnesotans in his illegal war in Iraq. The judge ruled against me, but George Bush decided not to come to the Minnesota convention.
A couple of years ago I sued the Park Board to get them to remove a rock weir that was obstructing the flow of water in Minnehaha Creek at about 30th Avenue. The judge ruled against me, but the Park Board removed the rock weir.
I’ve lost every battle. But I’ve won every war.
This time I think we would have a much better chance of winning the lawsuits. 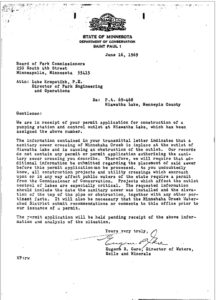 The Park Board responded to my question:

This is the statement in the “Hiawatha Golf Course Property Master Plan Frequently Asked Questions” answered three years ago:
“Can we remove the weir at the outlet of Lake Hiawatha to lower the lake? No. Once the water overtops the weir structure and equalizes with the level of the creek beyond, the weir is essentially useless and not holding back water. As of spring 2019, there is no difference in water level on either side of the weir, and the weir is fully submerged.”
I think the Park Board doesn’t really understand how a dam works. A dam (or weir) holds back water until the water level is higher than the dam and the water flows over the dam. If the water level is the same on both sides of the dam, then there is a further obstruction downstream that is just as high holding back an equal amount of water.
The Park Board also quotes the first paragraph of Section 8 of the 2017 Barr Engineering study, “Hiawatha Golf Course – Stormwater, Surface Water, and Groundwater Analysis Summary:”
“There are several high points in the Minnehaha Creek channel downstream of the lake that control the water levels. Upstream of the creek crossing at 28th Avenue South is a high point in the channel resulting from a utility crossing under the creek bed. There are also several other high points in the channel downstream of Lake Hiawatha based on the FEMA Flood Insurance Study creek profile and the Minnehaha Creek Watershed District (MCWD) XPSWMM model.”
The highest point obstructing the flow of water out of Lake Hiawatha was a rock weir at 30th Avenue. No one could explain why it was there. I asked the Park Board to remove it. They refused and ignored me. I sued the Park Board ordering a Writ of Mandamus to force the Park Board to remove this dam and thereby lower the level of the lake. The judge ruled against me, but somehow the rock dam/weir got taken down. The next highest points are the dam/weir at 27th Avenue and the five-foot sanitary sewer line. If the dam/weir were to come down, and the MPCA were to dig a channel under their pipe to stop blocking the natural flow of the creek, and corrections made for other obstructions, then the creek could return to its natural flow. The level of Lake Hiawatha would drop by as much as five feet. The peat soil wetlands surrounding Lake Hiawatha and Lake Nokomis would begin to drain and dry out.

The most notable outcome of the meeting was that the panel still had no answers as to the cause of the water problems other than the claim that the problem was due to too much rain. The homeowners were basically told to just deal with the problem themselves.

Here are some of the statements that were made by the 17-member panel:

Paul Hudalla, Engineer, Surface Water and Sewers, Public Works, City of Minneapolis. He answered the following questions:
Question: How will this water problem affect property values? Answer: “I don’t have an answer to that.”
Question: How will homeowners pay for water mitigation? Answer: “I don’t have a great answer for that.”
Question: Will there be compensation from the City of Minneapolis for flooded basements? Answer: “No.”

Another official made the following statement: “After looking at 70 reports or studies, the peat is still a mystery.” The White Paper inferred that peat may be the problem.

Michael Schroeder, Assistant Superintendent of Planning Service, Minneapolis Park and Recreation Board said, “We can’t give up our parkland to storm water mitigation.” This statement is particularly confusing considering that Mr. Schroeder has spent the last six years pushing a plan that would turn Hiawatha Golf Course into a huge storm water mitigation pond. Also, the Minneapolis Park and Recreation Board is considering a plan that would allow the City of Edina to dump more storm water into Bde Maka Ska such that Edina could create more flood water storage in their city.

The residents of the Lake Nokomis neighborhood deserve better answers!