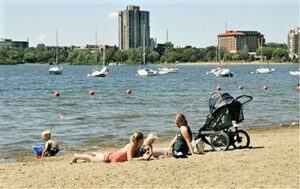 The proposed project would pump water from Weber Lake in Edina through the storm sewer system to a pollution mitigation pond at Bde Maka Ska in Minneapolis, then into Bde Maka Ska. The intent of this pumping is to lower the level of Weber Lake to increase flood water storage for Edina. But the water would be dumped into the city of Minneapolis and eventually, Minnehaha Creek, which is already suffering from excess water from the upper Minnehaha Creek Watershed District (MCWD). It would also increase the pollutant load to Bde Maka Ska. One concerning statement in the resolution says, “The parties to a proposed Cooperative Agreement believe that the additional pollutant load can be eliminated either within the City of Edina’s project or at a downstream location, with there being a potential for even greater pollutant treatment at some point downstream of the City of Edina’s project.” This means that the city of Minneapolis would not only be taking on more water, but it would be responsible for removing pollutants from suburban communities. This violates best management practices which state that pollution should be removed at the source. And where is this downstream place in Minneapolis? Could it be Hiawatha Golf Course?
This appears to be another project in the MCWD that would shift the burden of climate change to South Minneapolis, using South Minneapolis as the dumping ground for water and pollution, while a suburban community benefits.
This is exactly the wrong direction for the city of Minneapolis and MPRB to go. Communities in the upper watershed need to deal with their own water problems within their community, and not continue to transfer their problems to the next community down the line in the watershed. Maybe the city of Edina should take out some houses in Edina to create their own water mitigation and storage ponds as the city of Minneapolis has done.
Michael Schroeder, Assistant Superintendent of Planning at the Minneapolis Park and Recreation Board and Edina resident, made a curious statement at a public meeting about Lake Nokomis on Tuesday, May 31. He said, “We can’t give up our parkland to storm water.” Now that this plan has been made public, are Minneapolis city officials finally feeling even more backlash to their plans to turn South Minneapolis into a water dumping ground?
Where do Minneapolis city officials stand on this, that is, Mayor Frey, City Council Members Johnson, Jenkins, Chughtai, Palmisano and Koski, and Park Board commissioners? When are these public officials going to start standing up for their own constituents and stop allowing the suburbs to just continue dumping more and more water and pollution into South Minneapolis?