Is It “winter” for Metro Transit? 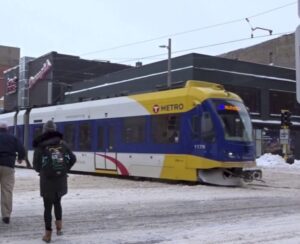 There is some good news, however: The new D Line on Chicago Avenue goes into effect at the same time all these cuts are being made. The D Line will be like Route 5, except it won’t stop every block. Stops within the Southside Pride readership area will be at 8th and Park (southbound), 7th and Park (northbound), Chicago and 14th, Franklin, 24th and 26th, Chicago-Lake Transit Center, Chicago and 34th, Portland and 38th (southbound), Park and 38th (northbound), Chicago and 42nd, 46th, 48th, 52nd and 56th, and Portland and 60th. The stops at 38th on Portland and Park are temporary until a final decision is made on what to do with the corner of 38th and Chicago, currently known as George Floyd Square.
The D Line will run once every 10 to 20 minutes, and mostly replaces Route 5. However, the regular Route 5, stopping every block, will still exist, running once an hour as far south as 56th Street. Riders going farther south will need to transfer there to the D Line. As the original plan was to run Route 5 every 30 minutes, I presume the driver shortage has affected this as well.
Metro Transit is hiring bus and train drivers and is offering a bonus to new employees: $5,000 if they already have a commercial driver’s license, and $3,000 if they have a regular driver’s license and need a commercial learner’s permit. Half is paid when they complete training and the other half after the probationary period. Information is available on their website, https://www.metrotransit.org. I also have information that they are raising wages next year from a starting level of around $21 per hour to about $26 per hour.
I fervently hope most Southside Pride readers don’t suffer too much from these extreme cuts in transit service. Metro Transit has cut service in hard times before, but it was usually on less-used routes in the suburbs or a bus running at midnight with one person on it. These cuts seem to be hitting Franklin Avenue unusually hard and will really impact people going from the Southside of Minneapolis to St. Paul.