How did they do that? 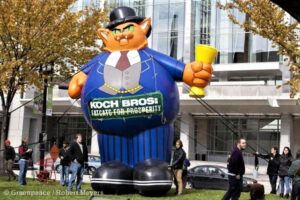 What just happened?
Did we get hit with an inflationary spiral that skyrocketed prices just before the election and then calmed down just before Christmas?
It seems evident that a rise in gas prices began the action. This was caused—it was widely reported and believed—by the Saudis withholding supply. They cut off supply, and that raised the price.
But do the Saudis really control that much of the U.S. market?
The Saudi oil refinery in Port Arthur, Texas, pumps 626,000 barrels of oil into the U.S. every day. That’s a lot of oil. It’s the largest refinery production in the U.S. But it’s only about 3% of the 20 million barrels the U.S. uses every day. By itself, Saudi withdrawal of oil from the market should not dramatically affect price.
The Koch refinery in Rosemount, Minn., pumps about 333,000 barrels every day. With the Saudis, the amount pumped would still be less than 5% of U.S. daily consumption. That still wouldn’t be enough to affect supply and price—unless Charles Koch could convince his friends at Marathon and Exxon to go along with the game.
The Saudis couldn’t have started the inflationary spiral by themselves. They don’t have enough market share to seriously rock the boat. They’re the obvious fall guys for the machinations of Charles Koch.
Is that what happened?
Did Charles Koch make a few phone calls and orchestrate a drop in production and consequent inflationary spiral? Did he do this to help galvanize a Red Wave of Republican victories in November? Didn’t he do the same thing to Carter in 1980—creating a gas shortage and lines at the pump—to ensure Reagan’s victory?
It must be a deliciously evil game to play—creating all that anguish and suffering and getting a Democratic president blamed for it.
Isn’t it time to stop Charles Koch from disturbing our peace and tranquility?
I wrote to Sen. Amy Klobuchar in October: “You are Chairwoman of the Subcommittee on Competition Policy, Antitrust, and Consumer Rights, which is tasked with oversight of antitrust enforcement at the Department of Justice and Federal Trade Commission and monitoring the state of competition in a variety of industries to help protect consumers.” I asked her why her committee wasn’t investigating Charles Koch.
I didn’t hear back.
I called her Public Affairs Specialist, left a message, no response.
I wrote her again on Nov. 19:
“I’m sorry we didn’t receive a comment from Sen. Klobuchar’s office on the obvious violation of the Sherman Antitrust law by Charles Koch and his partners in OPEC. https://southsidepride.com/2022/11/07/lock-him-up-3/
“I read in the Star Tribune that the senator is planning hearings in her Antitrust Subcommittee on the monopoly practices of Ticketmaster because their site crashed when people in Minnesota wanted to buy tickets to hear Taylor Swift:
“‘In an interview with WCCO-TV, Klobuchar said she will call a congressional hearing on the matter and demanded a Department of Justice investigation. On Friday, national media reported that the DOJ has opened an investigation.
“‘There just has to be consequences for this type of behavior,’ Klobuchar told WCCO.
“When she finishes getting tickets for Taylor Swift, would she consider asking her subcommittee to examine the practices of Charles Koch in the manipulation of the oil market?
“As a scholar of trusts and the antitrust movements, ‘Antitrust: Taking on Monopoly Power from the Gilded Age to the Digital Age,’ Klobuchar understands how certain interests that control significant market shares can collude and fix prices to the detriment of the American consumer.
“Shouldn’t Sen. Klobuchar hold hearings in her subcommittee to determine the role that Charles Koch plays in the oil market and, especially, how his actions in withholding oil and raising prices helped create this latest pre-election inflationary spiral?
“We would love to publish Sen. Klobuchar’s response in our December editions.
“Thanks for your help.”