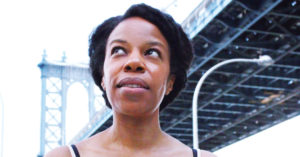 One can’t help it: The one-actor show invites our derision. Live theater already carries with it a tincture of self-indulgence, and unlike a memoir, where the reader has the choice to put aside the book, one can’t politely walk out of a small room with a stage. The audience finds itself at the mercy of the solo actor. However, in this latest Pillsbury production, written and performed by Nilaja Sun, I found myself not trapped but instead at the mercy of Ms. Sun’s talent.

The show’s opening invites skepticism, with a solitary Ms. Sun writhing and whimpering in an imitation that perforce recalls Donald Tump’s unforgettable mocking of disabled journalist Serge Kovaleski, but after my initial slight inkling of sarcasm, I felt nothing but awe. Sun’s talent shines through characterization, suspense and topicality.

She conceives, writes and performs a host of characters from her upbringing in Manhattan’s Lower East Side. We see a Puerto Rican family troubled by tumultuous times—the play is set during Hurricane Sandy of 2011. Candy, a precocious teen girl struck down by a brain aneurysm, centers the 85-minute performance—ironically, the character that had me worried at the outset. Her mother cares for her and sacrifices everything, while Grandfather Papi manages to chase skirts, gamble and drink away the few dollars his son Andre sends home fighting in Afghanistan.

Nijala Sun’s facility for storytelling is apparent in her character that speaks through absence, the family’s maternal figure, who has died, leaving the family aimless.

The stakes feel heavy in this drama—I genuinely wanted to get to the finish and see how it would all end. The script introduces conflicts and character motivations that invite the audience to reinterpret previous elements of the story, a sure sign of writerly craft.

A true professional, Sun comes to the Pillsbury Theatre’s main stage with a résumé full of recognizable roles in television, in “The Good Wife” and “Madam Secretary,” for example. Her most notable work was the one-actor show “No Child … ” and her list of numerous awards includes an Obie.

Director Ron Russell aids Sun with mise en scene (visuals and sound) that extend her already-capable characterizations. Candy is trapped in her own mind—bright but physically incapable of even breathing on her own. Andre’s PTSD rears itself at inopportune moments, as shown by lights (Tyler Micoleau, Michael Wangen) and sounds signaling both his heroism and his suffering. Music tells the story of three generations living together in a small apartment, while an old neighborhood friend of Andre’s presents New York City’s famous street culture.

We wait to find just what all of that Hurricane Sandy water will wash away. Each of the characters has imperfections and powerful desires.

I am reminded of the famous line from W. B. Yeats: “And what rough beast, its hour come round at last” will greet us as the hurricane’s rage falls on New York?

“Pike St.” plays at Pillsbury House Theatre from May 31 through June 18. Find more information at pillsburyhouseandtheatre.org. Contact Adam at schencka1@gmail.com.