Theatre in the Round’s “Private Lives”: Inside the relationship 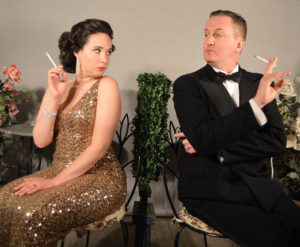 “They must be so happy together,” he said.

“Well, we’re not inside the relationship,” she responded.

Relationships: easy to judge from the outside but difficult to understand.

Usually we think of drama as exposing the deepest understanding of the human condition, but it takes comedy to explicate the full dysfunction of interpersonal relationships.

We have all had relationships go sour. If one hasn’t, then one isn’t trying. But what if one had the opportunity to reconnect to a passionate lover after everything went wrong?

Such is the premise for “Private Lives,” in which principal characters Amanda (Rachel Postle) and Elyot (Joe Rux), formerly married to one another, find themselves at the same French resort on honeymoon—with new spouses.

Yes, hijinks ensue. Theatre in the Round has found its wheelhouse with lighthearted British comedies, and Noël Coward’s writing fits aptly with previous shows like P.G. Wodehouse’s “Jeeves Intervenes.” I found Private Lives, however, to invite serious introspection as well as delight.

The play’s commentary on morality recalls Oscar Wilde, whose comedies invite reflection on self-interest versus duty. Wilde was a proponent of the “art for art’s sake” (or aestheticism) movement, which shocked Victorian English with stories in which the villain gets rewarded for his lack of scruples. Noël Coward’s work fits in that tradition.

The new spouses represent sensibility. Sibyl (Dani Pazurek) and Victor (Rick Lamers) are both good-natured, which is to say, unprepared for the caustic natures of their new partners. Director Dann Peterson sets up parallels and juxtapositions using set design and costume (both by John A. Woskoff), stage properties (by Rick Polenek), and lighting (Mark Kieffer).

But like in the Bruce Springsteen song, when Amanda and Elyot kiss, oh, fire. Postle and Rux had me believing in the power of crazy love—but also in that kind of love’s destructiveness. The play works because of their moving portrayal of that relationship’s flow: reconnection, infatuation, lust, and finally disdain.

Keep your friends close and your enemies closer, goes the saying, and this story finds a satisfying conclusion by obeying that dictum.

For the casual theatergoer, this Theatre in the Round Players production has much to recommend it; however, I found myself the only one laughing multiple times. Evidently black comedy is an acquired taste. Nevertheless the Sunday show was nearly a full house, with long rounds of applause to finish the performance.

We audience members must have appreciated the production company’s efforts, but perhaps the satisfaction stemmed from doing what one cannot do in real life. “Private Lives” offers a peek “inside the relationship,” a place where terrible people deserve each other. We should all be so lucky.