Highland Park: poised between past and future 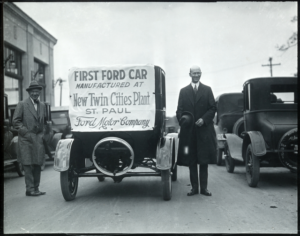 The automobile, specifically the Ford automobile (and truck) for good or ill, built Highland Park. This fact was amply reflected in the Ford-only Car Show that was a feature of the recent 2017 Highland Fest. But, you know, they don’t make Fords in Highland Park any more. And painful as it may be for some to hear this, there will come a time, possibly even in this century, when no one makes Fords, or any other fossil-fuel burning vehicle, anywhere. Much as we love Highland Park, possibly Minneapolitans’ favorite St. Paul neighborhood, we have to observe that a few of them do cling to the past just a bit more than is feasible. In a lot of ways, this dilemma is not unique to Highland Park. There is a lot to like, and to be nostalgic for, in the great American suburban lifestyle, a lifestyle which even invades the cities as it invades our consciousness. But the future is urban, high-density, mixed development, and without huge lawns. And of course we love our cars and all the great things they bring to us, and carry us to, but the future is car-free. The future is walkable.

There’s no doubt that Highland Park is a very desirable place to live. But even though everything one could want is located within the neighborhood and within a short distance, it isn’t really a place with a lot of biking and walking and public transit use. It still feels dominated by the automobile, just in a nice, friendly way, with nice wide streets and big conveniently located parking lots. There are signs that urbanity and density are moving in, though. A medium height apartment building is going up—The Finn—on Cleveland between the two main drags, Ford Parkway and Highland Parkway. In the current fashion, there are a few lifestyle-enhancing businesses already signed up to live on the ground floor facing the sidewalk—and the avenue. One is Agra Culture, a popular small chain of super-healthy foods. One is a very posh looking beauty salon/spa.

The process of redeveloping the former Ford Plant site is grinding on ever so slowly. There was a peak in activity on June 30, when the Planning Commission had a hearing on it. But nothing really new came up there, as the plan has been published and open for public comments for a while. The comments are pretty evenly divided between the lovers and the haters. Given the slowness of the process, the only thing I can fault the lovers for is undue enthusiasm. This is one of those deals about old people planting trees that they may never live to sit in the shade of. The Ford Plant was supposed to close in 2007, but actually worked on in diminishing output to 2011. So it’s been six years since it actually closed, and Ford Motors still owns most of the site and has at least a year to go before they complete decontamination and are free to sell it. (The hydro-power plant on the river has already been sold to Brookfield Power, and there is a 13-acre parcel of land owned by Canadian-Pacific Railway.) There is no buyer who has announced intentions to buy (although certainly there are developers out there). So the sale could take a year or more. And Saint Paul authorities say the build itself could take from 12 to 20 years. So they are talking about prioritizing seniors, but that means people who are now in their 40s and 50s. They are talking about the lifestyles of young families, but those are parented by people who are now in elementary or high school. It’s hard to know what they will want or need in 2040.

The kerfuffle about cars, to get back to what built this neighborhood, is a case in point. Opponents of the plan say that traffic is already too busy on Ford Parkway and Highland Parkway, and that the new influx of residents will jam the streets with cars and cause residents both new and old to drive out of the neighborhood to shop because of parking. This is what I meant about clinging to the past. I don’t think that’s true even now, and it will be so much less true in five, 10 or 20 years time. I think a lot of people are just simply in denial about the automobile. They can’t face the fact that they’re not going to be around AT ALL forever. (I mean the automobiles, but of course it’s true of us people too.) But even now, and I know this is just anecdotal, it seems to me that when denser, street-level development occurs in an area, you get more bike traffic and more transit usage, and only a small uptick in car traffic and parking demand. This is because these developments attract younger people, and for a mix of economic, environmental and simple lifestyle reasons, many younger people use cars less or don’t even own one. And there are other options now like HourCar and Lyft if a car is really required. A federal study concluded that 16- to 34-year-olds walk 16% more, bike 24% more, use transit 40% more and drive 23% less than the population as a whole.

The other rather unrealistic fear expressed by the more fervid opponents of the plan is about building density and heights. On the density, some commenters and campaigners want the entire site dedicated to non-residential and non-retail purposes, such as an arts center, or a “wilderness” area. These are unrealistic ideas, given the size of the site, and the dire condition of St. Paul’s tax base. But they are basing their opposition to the mix of residential, retail, park land and other uses on incorrect ideas about what the plan actually says.The plan itself has only guidelines, and what is actually built will depend on many factors, including “the market,” but the guidelines call for about 63 (out of 125) acres of residential development, with 33 acres for transportation, 15 for parks, etc., 15 for playing fields, and nine for stormwater uses. That’s more dense than the current elegant sprawl of Highland Park, but hardly dense at all in urban terms. And then there’s the building height issue. There are alarms raised that residents’ current “views” of the river will be blocked by the towering apartment monstrosities being planned. But the maximum height is 10 stories (and the minimum is two). As far as I can see, the only Highland Park residents who currently have views of the river live at 740 River Drive which is the anomalous 24-story block built in 1961. Not only is that just a wee bit hypocritical, but their nearest view of the River is in the other direction from the Ford Plant site anyway!

It’s all going to come down to what kind of master developer emerges in two or more years time to buy the property. Highland Park residents should concentrate on making their current neighborhood the best it can be, and take a leaf from the books of some other neighborhoods that are working with Transition Towns to squarely face the future and develop resilience and skills to outlive the almighty automobile.