CONFESSIONS OF AN UNREPENTANT MAOIST: Mo Burton and the Black Panthers, 1971, spring 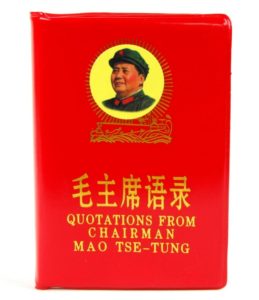 There wasn’t much to do after losing the election, so I started hanging out with Mo Burton.  He was a 6-foot, 2-inch, 290-pound black guy who had a great political analysis and wanted to start a local chapter of the Black Panther Party in Minneapolis.  We’d drive around, drink cheap wine, smoke some pot, talk politics and then play Go, an ancient Chinese/Japanese game of strategy.  He started a study group where about six of us sat around and read the Red Book by Mao and talked about theory and practice.

He thought we had to have a clubhouse, so he rented a little concrete block building behind a store on 38th Street in the heart of the black community.  I think he was starting to smoke a little too much pot because he was starting to get paranoid.  He thought the police were going to kill him.  Bobby Hutton had been murdered by the Oakland police in 1968, and Fred Hampton had been murdered while he was sleeping in his bed by the Chicago police and the FBI in 1969.  So, it was not too big a stretch to think the Minneapolis police might want to help with the Black Panther extermination campaign.  But when he started piling sandbags in front of the building and keeping a shotgun at the clubhouse, I thought he was going overboard.  It was the Kathleen Cleaver Information Center.  Kathleen was the wife of Eldridge (“Soul on Ice” and the guy who led the shoot-out in Oakland that ended up getting Bobby Hutton killed).

We had a support demonstration in front of the clubhouse on a cold spring day.  A young woman marched by in a fur coat. I wrote a song about her: “ ‘Hands off the Panthers’ her picket sign said.  It was freezing cold, but she didn’t mind the bother.  It makes me feel real she said.”

The police didn’t come by and murder everyone, but the landlord canceled his lease and the city forced him to tear down the building, and Mo ended up getting sent back to prison on a weapons charge.