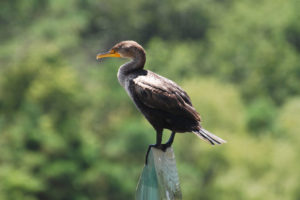 As I have written all summer, the small/song bird numbers are way down in the park, but good in most front and backyards.

The lake is quite high most of the time and the water is quite green most of the time. And at least four quite grown hardwood trees will be leaving the park, probably fairly soon, which will probably make things worse for the small/song birds. And birders!

Lately moderate numbers of Ring-billed Gulls have been returning to the lake after very few most of the summer. The Heron-like birds have also been down in numbers lately, but there is often one Great Blue Heron and one Black-crowned Night Heron. All of the Mallard and Wood Ducks seem OK.

A Double-crested Cormorant was on the lake today (Aug. 29). They make a few stops but not as many as most years.

The backyard and general neighborhood birding is going well. But I had one sad backyard issue today. I found a very beautiful but very passed-on male American Goldfinch lying on the sidewalk alongside the house. I said nice things to him and for him and wished him well on his journey.

Now, away from dead birds and on to another subject.

I went to Nebraska to be in the “path of totality” to see the Solar Eclipse. This was a three-day project: One day to get there, to York; one day to watch things at the Stuhr Museum of the Prairie in Grand Island; and one day to get back to wonderful Powderhorn. I did bring along a genuine Minnesota astronomer accompanied by an excellent nurse. OK, I did not bring an astronomer and nurse with me, but we had plans to meet the astronomer (I took a class from him many years ago) and his nurse/wife. We did connect with them and met various other Minnesotans. In fact, on the trip to and from that Nebraska site, we saw many Minnesota vehicles. The astronomer was providing all kinds of information to all kinds of people. The Stuhr Museum sits on 200+ acres so even though an estimated 6,000 to 8,000 people were there on Aug. 21, it was not crowded. The event and the weather were outstanding and now I want to go to the next Solar Eclipse event in the United States in seven years. I also watched birds, insects, animals, plants, what-have-you, and enjoyed our Monday evening meal in Lincoln with one of my favorite Chinese nieces.

I truly wish for fewer catastrophes, killings, negativity and overall concerning events that continue to make me sad most days.