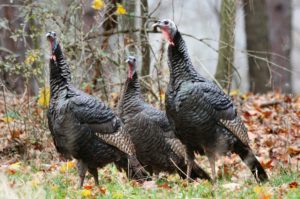 “On the road again” as Willie Nelson sings. Today (Sept. 27) I/we drove south on I-35 to Des Moines and then west on Interstate 80 and ended up in the middle of Nebraska, about where we were a little more than a month ago for the Solar Eclipse. Along the way, there were Turkey Vultures, American Crows, Canada Geese, a few hawks, and LBJs, or Little Brown Jobs, as birders sometimes refer to the small birds they don’t see well enough to identify. These noisy LBJs were in a tree at a truck stop at dusk.

But back to Powderhorn, and our local feathered friends. The larger of the bird species, Canada Geese, Mallard and Wood Ducks, and Double-crested Cormorants, have been abundant on the lake. But as I have said for many months, there is a lack of small birds.
On Sept. 1 there was moderate weather; high water, not too green; three Double-crested Cormorants; lots of ducks; some Canada Geese. And no small birds.

On Sept. 5 there was one Great Blue Heron (GBH), thick green water at the east end of the lake. And no small birds.

Later in the month there was a large bird flying, a Bald Eagle far away to the west of the lake; and two Northern Cardinals. Finally the songbirds are represented.

Three days later, possibly the same Bald Eagle landed on one of the light towers near the northwest end of the lake. From my vantage point on the south side of the lake, I walked counterclockwise to get a better view. I noticed a couple of park walkers scanning the trees. It turned out they had seen the eagle flying but not where it landed. I heard them talking and interrupted to let them know to look at the lamppost. We enjoyed the eagle’s posturing, flapping its wings and looking proud. After about 15 seconds, it left its perch and flew over the island and disappeared. So I continued on my walk around the lake and looked up at the cottonwood trees. I’m accustomed to seeing eagles either soaring up high or perched high up in a tree or on a post. Somehow, out of the blue, I spotted the eagle on the ground on the edge of the island at the water line. I noticed another couple and a single individual; they were starting to leave their places along the lake edge. The time was approaching sunset and the sky was getting darker. I could tell they had not observed the eagle so I pointed it out to them and these three people then used my binoculars to get a better view. I think it made their day, to see this symbol “up close and personal.” It truly was quite a view, especially with a GBH nearby, about 15 feet away.

A few days later, the house that I live in, when I’m not living in the old Dodge van in the alley, was having a 100th birthday party. Early in the morning, a Ruby-throated Hummingbird came to the backyard and hummed “Happy Birthday” to the house. After that, various people showed up at the house for the happy birthday celebration.

A few days further into September, a GBH was hiding in its various poses near where the eagle and GBH had been posing earlier.

About the last week of September, the number of Ring-billed Gulls went from a handful to about 20 or so, and have been visiting the lake every day. (But no small birds were appearing.)

On Sept. 26, I was going to my barber near the University of Minnesota. Yes, I do go to a barber! Between the hospital and the Mississippi River, I saw two Wild Turkeys. The first one was crossing River Road. Luckily the oncoming driver and I both stopped so the turkey could safely cross the road. And a little after that, I saw a second one come from the U of M campus and head down to the river. I have seen Wild Turkeys in that area various times, but have not seen them there for several years.

Another Powderhorn story involved a phone call I received from a park neighbor and friend who lives across from the park. Her son found a Hermit Thrush in need of help. It seems that the thrush was unable to fly. However, when I went to visit this bird, I saw it escape the “cat carrier” it had been using and subsequently fly around the kitchen. The thrush will be taken to the Wildlife Rehabilitation Center in Roseville to determine what troubles it has.

“Can’t wait to get back on the road again!” (More Willie!) We’re about halfway to our destination: Winter Park, Colo. If I/we don’t encounter any bears or mountain lions, I’ll write about the birds and four-footed friends we see at our unit and in Rocky Mountain National Park.