U.S. must sign the treaty to ban nuclear weapons 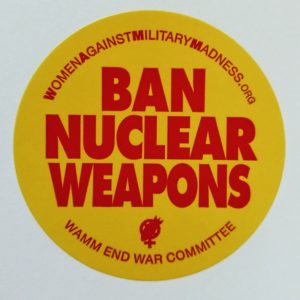 On Aug. 6, 1945, an American B-29 bomber, the Enola Gay, took off from Tinian Island with a 12-member crew. It was carrying one of the most destructive weapons the world had ever known, an atomic bomb that when unleashed over Hiroshima, Japan, immediately killed 60,000 – 140,000 people and injured 100,000 more. Three days later, the U.S. dropped a second bomb on Nagasaki; again the immediate aftermath was a nightmare. The decision to use these weapons changed the course of history, and for more than seven decades the world community has lived under the threat of nuclear annihilation.

People the world over have campaigned vigorously to abolish nuclear weapons, but generally to no avail. However, on July 7 of this year, 122 nations stood up to the world’s superpowers and adopted a landmark agreement to ban nuclear weapons, known officially as the Treaty on the Prohibition of Nuclear Weapons. While the nine nuclear nations are not among the nations who support the treaty, the hope is that this treaty will strengthen the global norm against the possession and use of these weapons; that it will establish a powerful new international legal standard, one that stigmatizes nuclear weapons and compels nations to take steps toward disarmament.

The U.S., which could have used its power to end the peril that nuclear weapons pose to the world, chose instead to boycott the negotiations and worked to persuade approximately 40 countries, including our neighbor Canada and most of the NATO states to join the boycott.
Nuclear weapons are the only weapons of mass destruction not yet prohibited under international law, despite their imminent danger and their inhumane and indiscriminate nature. There are approximately 15,000 nuclear warheads in the world held by nine nations—U.S., Russia, U.K., France, China, India, Pakistan, Israel and North Korea. Ninety percent of these weapons are held by the U.S. and Russia.

All nine nuclear-armed countries are currently planning to upgrade and modernize their nuclear arsenals. The U.S. alone is planning to spend $1 trillion for redesigned nuclear warheads, as well as new nuclear bombers, submarines, land-based missiles, weapons labs and production plants. In addition to the outrageous cost and the fact that the U.S can already destroy the world many times over, this nuclear modernization plan violates the terms of the 1968 nuclear Non-Proliferation Treaty, which requires the nuclear powers to engage in nuclear disarmament. It also fuels another potentially catastrophic nuclear arms race.

It is not easy to talk about banning nuclear weapons to people who believe in nuclear deterrence or the need for a strong military, but talk we must. Here are what I believe are some strong arguments for nuclear abolition.

First, the abolition of nuclear weapons is an urgent humanitarian necessity. There is no effective humanitarian response, no meaningful health response, to the use of nuclear weapons. They are unique in their destructive power, in the unspeakable human suffering they cause, and in the threat they pose to the environment, to future generations, and indeed to the survival of humanity.

The second issue is security. It is interesting to note that most of the countries that did not vote for the Treaty on the Prohibition of Nuclear Weapons said nuclear weapons were “essential for security.” Nuclear weapons, in fact, make us less safe. Rather than keeping the peace, they breed fear and mistrust among nations. The current U.S./ North Korea “stand-off” is a case in point. In addition, these weapons are useless in addressing today’s real security threats, including terrorism, climate change, extreme poverty, overpopulation and disease.

And there have been many documented instances of the near-use of nuclear weapons as a result of miscalculation or accidents, including times when the decision to launch was seconds from happening. Unless we eliminate nuclear weapons, they will almost certainly be used again, either intentionally or by accident, and the consequences will be catastrophic.

Third is danger to the environment. Nuclear weapons are the only devices ever created that have the capacity to destroy all life on earth. According to studies by Physicians for Social Responsibility, the use of even a fraction of current arsenals would cause catastrophic climate disruption, a devastating agricultural collapse, and a global famine that could kill more than two billion people. And as climate change progresses, the danger of nuclear war will increase dramatically as nations experience limited food and water resources and try to deal with forced migrations that could dwarf the current refugee crisis.

Fourth, economics. Nuclear weapons programs divert public funds from health care, education, infrastructure repair, disaster relief and other vital services. The nine nuclear nations spend tens of billions of dollars each year maintaining and modernizing their arsenals. Where will the U.S. get the $1 trillion it is planning to spend? From Social Security and Medicare?

The Treaty agreed to on July 7, 2017, prohibits nations from developing, testing, producing, manufacturing, transferring, possessing, stockpiling, using or threatening to use nuclear weapons under any circumstances. It also makes it illegal to assist, encourage or induce anyone to engage in any activities prohibited under the treaty. In addition, nations must not allow nuclear weapons to be stationed or deployed on their territory.

A nation, such as the U.S., that possesses nuclear weapons can join the treaty so long as it agrees to remove them from operational status immediately and destroy them in accordance with a legally binding, time-bound plan. It would also be required to eliminate its entire nuclear weapons program.

Germany, a nation that hosts U.S. nuclear weapons on its territory, can join the treaty so long as it agrees to remove them by a specified deadline.

The treaty will be open for official signing by all members of the U.N., and others, on Sept. 20, 2017, and will take effect 90 days after the 50th nation has ratified, signed or accepted it. It will be legally binding only on those nations that sign it; however, many believe that the strenuous and repeated objections of nuclear-armed states is an admission that this treaty will have a real and lasting impact.

Signing the treaty is a relatively simple act performed by the executive branch of a government. Ratifying typically involves a legislative process. In the U.S., the Senate is the body that would ratify the treaty.

The day the treaty was signed, the U.S. issued a statement that read “We do not intend to sign, ratify or ever become a party to it.” At the same time, the current confrontational U.S. military posture toward Russia, China and North Korea are creating conditions that could easily trigger a catastrophic nuclear war.

This need not be. Relationships with these countries can be normalized, economic ties can be strengthened, trust can be restored, and the nuclear threat can be defused. But it will take a major change in policy, transforming U.S. nuclear, military and foreign policy from global dominance to global cooperation, and leaders who genuinely want peace more than war.
Marie Braun is a member of Women Against Military Madness. For information about the WAMM Campaign to Ban Nuclear Weapons, contact the WAMM office at 612-827-5364 or WomenAgainstMilitaryMadness.org.