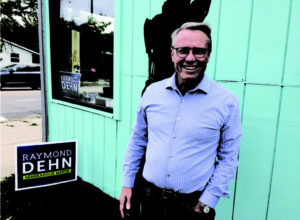 We think he understands the problems we face in Minneapolis: “Centuries of over-policing and misconduct have created a fundamental distrust of police by people of color and indigenous communities (POCI)”; “Every person deserves to live in a safe, quality, affordable home. Markets alone cannot meet the needs of low- and moderate-income people, therefore the duty falls on government to implement nondiscriminatory housing policy”; “People of color and indigenous communities are disproportionately impacted by environmental hazards.”

“Fundamentally change the funding and operations of MPD to redirect a portion of the police budget toward affordable housing, education, homelessness prevention, mental health services and job training programs”; “demilitarize the police by banning military-grade equipment and create a culture of policing that prioritizes de-escalation.”

The incumbent, Betsy Hodges, has failed the citizens of Minneapolis on two very important fronts. She had the opportunity, when it was clear that US Bank and Wells Fargo had systematically discriminated against minority communities in mortgage lending practices, to bring suit against these banks and try to recoup some of the $20.5 billion dollars in home equity that was lost in the 2014 housing bubble. She had the facts. She had the opportunity. She did nothing.

Senator Patricia Torres Ray announced on Oct. 5: «I’m endorsing Nekima Levy-Pounds because I believe in her capacity to lead, and the strength of her vision for the future of Minneapolis.

“For the past 29 years I have witnessed many leaders who have had good intentions but who had timid plans to address inequities in our state. This approach has not worked, and we continue to have some of the largest disparities in the nation. Nekima’s approach to resolving these disparities will not be timid.

“Letting business elites and developers chart the course for the city has largely left the needs of youth and minority communities unmet. Nekima’s focus on opening jobs and opportunities in low-income communities, and building community-led policing services will generate the growth and trust we need in our city.”

In Ward 8 we like Andrea Jenkins. She has years of experience working for the City Council. We’re confident she’ll be a progressive and effective voice for people in South Minneapolis.

In Ward 11 we support Jeremy Schroeder. He has enthusiasm, experience and integrity. John Quincy supported the Vikings stadium and laughed at people who thought they had a right to vote on it because that right was written into the Minneapolis City Charter twice.

In Ward 12 we support Andrew Johnson. He is responsible and responsive. He was one of only three council members to support the Charter Amendment raising the minimum wage to $15 an hour.

We support Meg Forney, Mike Derus and Charlie Casserly for Park Board At-Large. They want to keep the Hiawatha Golf Course open.