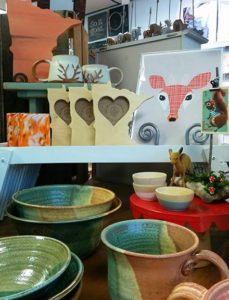 Last year we suggested that there is a virtual small town called Stan-Eric, taken from the identifier of the e-democracy email list for Standish-Ericsson neighborhood. And 28th Avenue is that town’s main street. For most of this town’s virtual life, the commercial corner at East 42nd Street and 28th Avenue has been the apparent nexus of the business neighborhood, but in recent years, the nearby corner of East 38th Street and 28th Avenue has been developing into a hub to rival it. Between the two, 28th Avenue contains the two dominant institutions of the eastern half of Stan-Eric: Roosevelt High School and the Roosevelt Library. Roosevelt HS has been on an upward trajectory lately. Three years ago, Principal Mike Bradley and Arts Coordinator Candida Gonzalez successfully put pressure on the school district for a more equitable share of funding, and shifted the major emphasis away from remedial math and reading to enriching arts offerings, as a bid to retain pupils and ultimately boost achievement. The theater program was reinstated after a 10-year lapse, and a spring “Art Crawl” was initiated, among other very high profile and high quality events. This has been quite successful after a little over two years in place. At the start of the school year, Roosevelt borrowed an idea from South High and others to have a big Welcome Back event with City Council Member Andrew Johnson and other neighborhood notables. A special upcoming event at Roosevelt HS is the theater department’s presentation “Almost, Maine,” a romantic comedy by John Cariani, on Nov. 16 through 18.

Roosevelt Library has seen a few changes, but nothing dramatic. Since its reopening in June 2013, its active Friends of the Library group has managed fundraising and special events, notably book sales. The “founding” head librarian left about a year ago to take a regional job, and there have been several changes in the head librarian role, but things are ticking along. The next book sale (these are awesome by the way, even by the normal high standard of library book sales) is Oct. 21, from 10 a.m. to 3 p.m. It looks like the Writer’s Group that was meeting there has ceased to meet, but the Mystery and Thriller Book Club is still going, with meetings the third Saturday of the month starting at 1 p.m. (which means it coincides with the Book Sale this month). Friends of the Roosevelt Library, by the way, are almost always open to more board members, so if you’re interested in getting more involved, send an email to roosevelt@supporthclib.org to ask if and how you can be elected to serve.

While things remain stubbornly the same at 28th Avenue and 42nd Street, there is upheaval both good and bad at the northern corner on 38th Street. The coffee shop curse there has claimed another victim, as Keen Eye Coffee very abruptly closed a week or two ago. This happened without warning against the backdrop of two other dynamics going on. One is that Sisters’ Sludge has been taking an inordinate amount of time to accomplish its move from the corner of Bloomington and 46th Street to its new location in the former Social Dance Studio space on the NW corner of East 38th Street and 23rd Avenue. Loyal friends of Keen Eye worried about the impact on it of a powerhouse like Sisters’ Sludge, but then they went and closed before Sisters’ Sludge even opened! Sister’s move was not strictly voluntary, but they seemed to be rolling with it and were using it as an opportunity to expand, adding a wine bar. According to their Facebook page, they will in fact really truly open in mid-October. The other major thing happening on this corner, which may have negatively affected Keen Eye even though it could have led to a boon later on, is the fast-progressing construction of a mixed residential and commercial project on the corner immediately opposite to the west. Groundbreaking for this four-floor, integrated development, cleverly dubbed “3828,” was almost exactly a year ago, and progress has been swift. Keen Eye’s owners suggested their loyal customers might look to nearby Angry Catfish for their caffeine needs.

Back at 42nd Street, nothing has gone out of business, so that’s a plus. Starting at the SW corner, behind the Audubon Mississippi flyway mural we covered a year ago (I still love it) sits Doodle Bird, which is still a relative newcomer to this corner with its 40- and 50-year-old-plus businesses. The upside of this is that they add a nice contemporary trendy counterpoint to the older neighborhood feel of the other stores. Doodle Bird carries quirky, crafty gifts, with an emphasis on the hyperlocal and the seasonal. Their unique cards are a welcome contrast to the Hallmark variety.

Across the road to the north is St. Mane Sporting Goods; with its firm ties to Roosevelt HS and every other sports team small or large (custom printed “kit” being one of their strong suits), they aren’t going anywhere. However, on the personal level, a sad note intruded when the founder, Bill St. Mane Jr., passed away at the age of 82 on Aug. 30. Bill was a 1953 Roosevelt HS graduate and a lifelong and passionate supporter of youth sports, founding the Dinomights/Bill St. Mane Legacy Fund to advance that purpose.

On the NW corner, Flannery’s Auto, a major neighborhood stalwart, continues to be busy all day. Besides being a fine place to get your routine car maintenance done, as this writer can attest, they also sell gently used cars. There are a lot of good car mechanics in this neck of the woods, so Flannery’s still has to compete to keep the business. And they manage to do so.

And finally, we have the power corner at the SE point. Angry Catfish, a very cool bike-oriented coffee shop that many say has the best coffee in Minneapolis, and A Baker’s Wife whose terrific bread and pastries are legendary in South Minneapolis, flank the strongest draw of all, Buster’s on 28th. We covered it in more depth last year, and it’s also been hailed by the hit food TV show “Diners, Drive-ins and Dives,” so I’ll just say that I am going there more and more often and I never have a meal or drink that’s anything less than fine. Buster’s is always busy, with their sidewalk area bustling all day every day throughout the summer and as late into the fall as they can manage. They are one of the best local champions of craft beers, with an excellently curated large selection. And something you wouldn’t expect from what is basically a genteel sports bar, they have in our humble opinion the best Sunday brunch in the neighborhood.