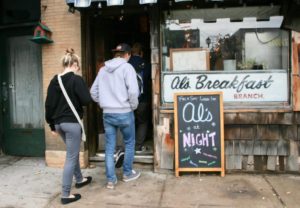 It started with the railroad, or at least that’s what some historians claim. The small four-block commercial section of the Marcy-Holmes neighborhood called Dinkytown may have gotten its name from the railroad tracks that ran through the area. Or maybe, not.

Photographer and Minneapolis historian Steve Bergerson says that the area was strategic to the growth of the city, with the railroads bringing grain and other raw materials to the city’s mill district. “The first train came in to Minneapolis on June 28, 1862,” he said. The switch engines were known as dinkys and the name stuck.

Or, perhaps, it was named by the railroad workers for a small railway way-station where they disembarked to get to their factory jobs.

Al Milgrom, the legendary filmmaker and Dinkytown historic preservationist, claims that it was named by students from small towns who saw the area as a refuge from the nearby urban hubbub.
Or, maybe it was named after 1940 Gopher football player Frank “Dinky” Rog.

The truth is, no one knows. A lot of Dinkytown’s history is subject to speculation and debate. But, there is little argument that the area now known as Dinkytown has, for nearly a century and a half, been a thriving and colorful part of the Twin Cities.

The area’s early economy was dominated by the railroads, but by the 1880s, the area began to be dominated by the University of Minnesota. By 1922, following The Great War, enrollment had grown to nearly 12,000, and following WWII, with returning soldier’s tuition paid by the G.I. Bill, the number of students attending the University climbed to 34,100. Businesses began to cater to the student population.

Al Bergstrom, who had worked the griddle during the 1940s at a popular Minnesota State Fair cafeteria, opened up a diner in a former hardware store on 14th Avenue, adding a long counter with 14 stools to the 10-foot-wide space. The door to Al’s Breakfast opened on May 15, 1950, and was an immediate hit. By the next year, then-Governor Wendell Anderson, a frequent patron, proclaimed May 15 as Al Bergstrom Day. Al’s is thought to be the smallest restaurant in Minnesota.

When Bergstrom retired in 1974, he handed the little restaurant off to his nephew, Phil. The diner was later sold to Doug Grina and Jim Brandes. When Brandes retired at the end of 2016, Alison Kerwin, who had worked at Al’s for 20 years, stepped in to take his place. But, through the years, the menu and the ambience stayed the same.

“We’re the oldest surviving business from a million years ago,” said Grina. “We’re part of the thread of people’s memories. People come in after being away and say, ‘I’m glad you’re still here.’ ”
The customers and the staff are more than family, he says. “It’s a community. No one ever quits. They may go on to have other careers, but they always come back. I will be boss for a couple more years, but I’ll still come back. It’s so much fun.”

Al’s has found other fame. It has been mentioned in a number of books and movies and has received a James Beard award as “An American Classic.” Once, said Grina, the diner got a letter from some place in Europe. The only thing on the envelope besides a stamp: Al’s Breakfast. Dinkytown, USA.

The restaurant still manages to serve an average of 180 diners a day. Except for their first year as a full-time restaurant, for 67 years they’ve served breakfast only. But, in one of the biggest changes in their long history, the restaurant recently opened on Friday and Saturday evenings, for the dinner and the post-bar crowd.

About the time that Al’s was getting established, American culture was changing. Beatniks, espousing radical social ideas, were gathering at The 10 O’clock Scholar, a small café, to listen to music and poetry readings. At the Scholar, you could hear a John Koerner, Diamond Dave Whitaker or a young (and future Nobel Prize winner) Bob Dylan. The 1950’s counter culture evolved into the 1960’s and 1970’s hippie scene.

There were more changes coming, and members of the counter culture would circulate from the Scholar, to the Dinkytown News Stand, to McCosh’s Bookstore to discuss the issues of the day. The University was still growing. By 1968, enrollment had grown to 55,300 students.

Melvin McCosh was forced to move his bookstore to the West Bank when the next-door Bridgman’s expanded. (The eviction prompted a student sit-in.) He later took his books to a former nursing home in Excelsior, holding periodic sales, which he advertised with postcards and the catchphrase “You need these books more than I do.” But he was a frequent visitor to Dinkytown, once coming back to build bookcases for another bookstore, The Book House.

The Book House opened in 1976 as a result of drastic budget cuts to libraries. “My former husband and I had mail order operations, selling academic books to libraries,” said Kristen Eide-Tollefson, the senior partner at the Book House. “But, with the cuts, the libraries stopped buying.”

Partnering up with another couple in the same business, Rob and Lynn Woznika, Eide-Tollefson (then Kristen Cummings) and her then-husband James, took their vast book inventory and opened the Book House, now a used bookstore.

Another bookstore, Perine’s Campus Books, had been the place to go in the 1950s and 1960s for new and used textbooks and tomes on philosophy, history and science. The shop closed in the early 1970s. The 1890 brick building that housed it had once been home to a popular restaurant called Stiffy’s and a dance hall where people came to listen to live bands and dance to Ragtime music. Ninety years later, in the 1970s, a restaurant called Greenstreets opened on the top floor.

“Greenstreets had terrific food, but no one came,” said owner John Rimarcik. His banker suggested a new name, Annie’s Parlour. Changes to the menu helped too. “When we shrunk the menu, serving mostly burgers and malts, people came. We’ve done good business ever since.”

Dinkytown has an active historical preservation community, working to save the quirky character of this unique Minneapolis neighborhood. Kristen Eide-Tollefson, from Book House, is a member of the board of “Preserve Historic Dinkytown.”

In 2015, the Minneapolis Heritage Preservation Commission voted to make the four-block area of Dinkytown an official historic district. But, this is only a recommendation to the City Council, so nothing is guaranteed. Preservationists face strong opposition from members of the Dinkytown Business Alliance.

“There is a set of historic district guidelines in process, not yet finalized, but far enough along for the developers to be clear about what appropriate development is for Dinkytown,” said Eide-Tollefson. “In light of this, it was very discouraging to have CPM (College Property Management, a local real estate development company) propose an 16-story student housing tower for the center of Dinkytown. They ran this up the flagpole at the neighborhood land use committee meetings. There was a great deal of public objection and they have so far not returned.”

And, the new urban movement for high-density areas remains a threat. “There was a ‘very high density’ amendment to the city comprehensive plan, encouraging higher density in the growth areas. We have worked to have Dinkytown and the other surrounding historic districts removed from the language.

“But, that doesn’t really protect them,” she said. “It just makes them less of a target. The preservationists remain in an eternal vigilance mode. We are all part of the radical legacy of Dinkytown.”