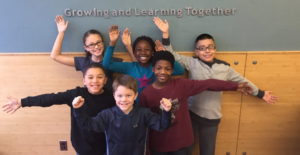 This is what is happening to our public schools in Minneapolis.
Parents look at the scale of the public schools—so complex, so many people—and they worry about their kids. Would their kids be safe? Who could they turn to? Where are friends and people who look and act like me?

That’s why different ethnic groups want charter schools. They want schools that emphasize their cultural values, that look familiar, with students who look like them.

Parents want their kids educated. But, most of all, they want them safe.

And the scale of buildings and classrooms in the Minneapolis Public Schools (MPS) doesn’t look safe.

There are seven major high schools in the MPS. If you live in South Minneapolis, you go to South or Roosevelt or Washburn. Those are your neighborhood high schools.

But that’s too few schools, and the schools are too big.

Let’s start with public daycare on every block. Then, grades kindergarten through third grade in about a four-block area. Then, grades four through six in 16 blocks, etc.
We’ve already got specialty high schools for the gifted and talented, for religious and cultural groups, for Spanish immersion, for college prep. Why not have a high school for kids who live in Diamond Lake? Or Hale? Or Page? What better way to build lifelong friendships and community?
The scale of today’s educational institutions is based on what people thought we would need as a highly industrialized country in the 1920s and ’30s: We would need a large industrial proletariat.

Capitalists and Communists agreed, “We’ll need a working class that is used to working in large buildings with lots of other people.”

But that is not what we need today. We need a sense of community. We need to know everyone on our block, in our community. No one left out. But none of us has the time to go to all those meetings and meet everybody, so the best thing to do is have a neighborhood school where your kids can tell you all the news in the neighborhood. It would be the best way in the world for young families to get to know each other and learn to help each other.

And the kids would quickly catch on that they were an essential part of their community, and they would begin to learn the pride of ownership.

We are very wealthy. We have roads and water and electricity, etc. Beautiful parks. All this was built for us. It is ours because we live here. We need to understand and appreciate those gifts and know how to preserve them for our children’s children. And the best way to understand our inheritance is on a scale that a child can appreciate.

The most important thing you can teach a child is to love themselves, their family and friends and their community.