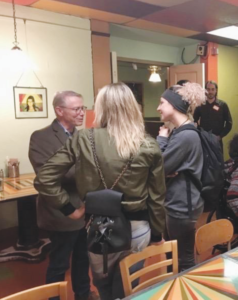 If you’re reading this after Nov. 7, either our choice for mayor, Raymond Dehn, is the new mayor-elect (and this will give you an insight into why), or, he isn’t (in which case this is just a nostalgia piece).
If you’re reading this on the 6th or the 7th—go vote! (Unless you already have, of course.) For mayor, vote Dehn as your first choice. Dehn himself recommends Nekima Levy-Pounds and Betsy Hodges as your other two ranked choices.

Ray, being the name he mainly goes by, set up campaign headquarters in Powderhorn, in the Kill the Snake building at 3100 Cedar Ave. He held a Meet and Greet at Modern Times Cafe on Oct. 18 and not one but two Southside Pride columnists were there. (Well, we practically live at Modern Times anyway, so it was no big deal.)

Elaine was impressed. She described Dehn as a “nuts and bolts” kind of guy. She noted that he talked about how his current role, state representative for 59B (North Minneapolis) has enabled him to learn all about how the city and the state and other governmental entities interact. She also took favorable note of his statement that he likes having friends or working with groups who don’t agree with him on everything.

I heard Dehn at the City DFL endorsing convention and in a couple of forums.  I think he’s a policy wonk.  Neither of us were aware that Dehn had trained and worked as an architect, among other points in his career path, and

Dehn feels that having the big picture, systems-oriented view, and understanding how changes in one system affect other systems, gives him an advantage over candidates with a more traditionally political career.
Dehn’s audience was enthusiastic and supportive, consisting of about 20-30 neighborhood people.

We keep feeling better and better about Southside Pride’s endorsement of Raymond Dehn for mayor.