Honey Badger don’t give a damn! 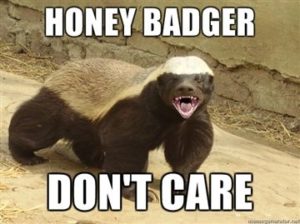 Get out of his way.  He’s off the rails.
He’s acting crazy.  He can’t be stopped.
He’s gonna take it over the top.

Honey Badger can be really mean
It’s the modified version of the A15
Paddock used it in Vegas
It’s a killing machine.

I see this election as a contest between honey badgers and worker bees. We make the honey. We pay taxes to make our city even more beautiful than it is, and the honey badger sees that pot of honey and he wants some. He wants it for sports stadiums and developer write-offs. Glen Taylor, the owner of the
StarTribune, had the honesty to admit that it’s all about electing a mayor who will help the honey badger, and that’s why he endorsed Jacob Frey:

“He’s rightfully proud of his support for a building boom in his ward—and rightfully annoyed that Minneapolis lost the opportunity to be home to a new Major League Soccer stadium, now being built in St. Paul. A rebuff
in the mayor’s office to a request for tax abatement sent team owners (a group that includes the owner of this newspaper, Glen Taylor) into the arms of a more eager mayor, St. Paul’s Chris Coleman. Frey tried to keep a Minneapolis option alive as prospects dimmed. He argues —correctly, we think—that a different mayoral approach would have produced a different result.”

I don’t think the honey badgers need any more help. I think it’s time for the worker bees to get together, put the honey badger outside the room and start fixing up the hive. We don’t have adequate housing, health care or educational opportunities. We have homeless people in Minneapolis this winter that may freeze to death. That’s a bigger priority to me than a soccer stadium for Glen Taylor.