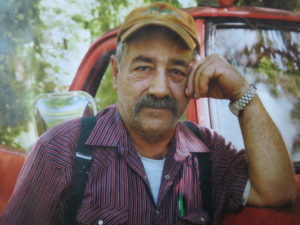 There are hundreds of tributes to Bruce Bacon on his Facebook page. Southside Pride offers the following memories.

ED FELIEN wrote: Carol Hogard, my wife, says Bruce was one of the first farm-to-table organic farmers. Many of the area restaurants bought his basil, so we’ve all of us in South Minneapolis probably tasted his providence. He’d show up at our Solstice Party with a goose. He used to carry a pair of garden clippers with him and cut back extraneous growth on trees; he called himself a Guerrilla Gardener. He was very serious about the world and very silly about himself.

ELAINE KLAASSEN wrote: I met Bruce Bacon at the end of the ’90s when I called him to write something for the newspaper about organic farming. The conversation lasted for three hours. I went to the farm various times. He explained that by having these 90 acres, he’d been given a great gift and he wanted to create a place that many people could use and benefit from. I’d say he was successful beyond his wildest dreams. Bruce’s way with words was captivating. Walking around in the acres of trees, he talked about “editing” them. He was a poet and a very sweet person. His son called once when I was there and I heard him speak to his grown child with marked gentleness and respect. He signed off with “I love you.”

DAVID RUBENSTEIN wrote: Bruce liked to say we were deputized in the sixties. We were part of the West Bank scene at the time—music in the cafes at night and revolution in the air, and all that. The co-ops were just starting up. We were anti Vietnam War and anti a lot of other things, including the St. Paul campus ag school, which we considered a handmaiden to the chemical industry and big agriculture. That hatchet has been mostly buried over the years, and Bruce more recently had a good relationship with some of the people there. I was out at the farm a few years ago when a contingent of visiting students from the People’s Republic of China was being given a tour. It was pretty ironic considering where we were at in 1970.

It was that year that Bruce went back to the farm, which had been in his family for about three generations. He went to live with his great-uncle Joe, and he started building. There was wood heat and a hand pump. In a way I think it was a bit of a refuge and escape from that West Bank scene, which was getting pretty hectic. It was shortly after that he got married and very soon had two boys and began a project to make that farm what it is today.

I learned from Bruce that compost isn’t something you add to the soil. He built the soil, field by field, bed by bed, using all kinds of local connections he made over the years. He had an arrangement to get hay from one neighbor, seasoned horse manure from another, and he even had some kind of deal with a local municipality where they were dumping semi-loads of wood chips onto one of the fields, which he later topped off with hay and manure. That went on for years. The result was some of the most fertile and productive soil you can imagine. There are chefs in some of the best restaurants in the twin cities who will vouch for that. The soil he built is amazing. You can stand there on a dry day and push a pitchfork ten inches into the ground.

The farm also became over the decades a cultural mecca, a place where artists hung out and musicians played at various gatherings. There’s the older generation—Spider John Koerner, Willie Murphy, Bill Hinckley and Judy Larson among others—and more recently the Cactus Blossoms and Jack Klatt, who also is among the hundreds of people who have worked and lived out there.

Bruce was a force. He had a wonderful way of talking. I heard someone say once he was an oral poet, and that’s true. Truth be told, he liked to make things complicated and if things started to get too simple he’d go off and make them complicated again. You couldn’t get around it. I can’t tell you how much we’ll miss him, and how many of us there are.

There will be two Bruce Bacon Memorial Celebration/Fundraisers for Garden Farme on Sunday, Dec. 10. The first event is from 2 to 5 p.m. at Hook and Ladder (Minnehaha and Lake) with local music, memories and images. Donation suggested.
The second event is from 5 to 9 p.m. at Powerderhorn Park Community Center with a potluck, storytelling, Garden Farme honey sale and music.