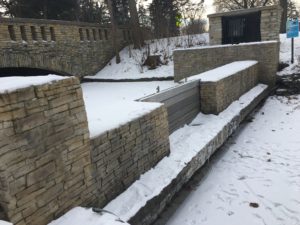 I have the unique blessing of being optimistic.

Sometimes it’s hard to fight the negative, but I tend to look at the bright side of things and assume the best.

It’s getting harder to do that when I look at the water situation in Minneapolis.

When I first realized the problem with the water in my basement and the completely flooded parks surrounding Lake Nokomis, I reached out to my council member, John Quincy. He was not helpful and it wasn’t a surprise to me that Quincy wasn’t re-elected in November.

I asked Quincy’s replacement—newly elected Council Member Jeremy Schroeder—what his plans are for the high water levels at Lake Nokomis.

I got this response: “High water levels are a real issue for those living near Lake Nokomis, and I understand the frustration with officials who haven’t yet offered up a surefire solution. It’s a priority for me to work with staff at a range of agencies—including the city, the Minnehaha Creek Watershed District and others—to determine both the root causes and range of effects of high water levels. From there, we can identify and explore solutions that will work long term to protect residents and their homes. On the campaign trail and now, as I head into City Hall, I’ve heard loud and clear that this is a key issue for lots of folks in our Ward 11 community. I look forward to not only getting to the bottom of it but also bringing some relief to those affected.”

To me that response sounds like someone still on the campaign trail, but I’m sure Mr. Schroeder just needs a bit more time to get settled.

It seemed an odd disconnect from his predecessor’s Dec. 12 email that actually detailed city staff’s work to define the problem and work with the other governing agencies and take steps to protect the area. Quincy’s email was a year late and I believe the election showed it. I was ready for Jeremy Schroeder to be poised to advocate for solutions, but at this point I have to admit I don’t know if I can stay optimistic.

There are citizens working hard to put pressure on the elected and appointed government officials who hold the keys to solving these water issues. If you want to stay connected please complete this form: http://bit.ly/NokomisWater.

[Editor’s Note: In our August 2016 Nokomis edition of Southside Pride, Deanna Boss wrote:
“Park Commissioner Steffanie Musich’s response to the woes of my flooded basement from last month’s article was that we need to plant more native grasses and flowers with stronger root systems to better manage storm water.
“Then, she wrote: ‘The elevation of Lake Nokomis is controlled by the Minnehaha Creek Watershed District (MCWD). They determine when the weir (an adjustable dam) can be lowered. This does not happen immediately after a rain event because the surge in the creek takes a few days to subside to a point where creek elevation is lower than the lake level. The weir was installed to prevent the waters of Minnehaha Creek from entering Lake Nokomis. This separation keeps aquatic invasive species, bacteria (like e.coli, Giardia, Crypto) and pollutants in the creek from contaminating Lake Nokomis and has resulted in lower bacteria counts at Nokomis’ beaches, keeping them open throughout the summer, unlike Hiawatha’s beach, which is frequently closed because of high bacteria counts.’ ”
What Commissioner Musich seems to be saying is that the dam will back up 5 feet of water to increase the volume of Lake Nokomis, thereby reducing the concentration of e.coli and other bacteria. The Lake Hiawatha swimming beach is “frequently closed because of high bacteria counts” because the lake is only 15 feet deep at its deepest point. When it was created as a recreational lake by Theodore Wirth in 1929 it was 33 feet deep and clear. The sand that is dumped on city streets in winter to help us stop running into each other eventually flows through storm sewers to Lake Nokomis, Lake Hiawatha and Minnehaha Creek. We could restore water clarity and reduce concentrations of bacteria if we dredged the lakes back to their original depth. Damming up the outlets will increase volume and improve clarity and reduce concentrations of bacteria, but raising the water level by 5 feet will also raise the water table in the surrounding neighborhood and cause flooded basements. Dredging the lakes every 30 or 40 years should be considered normal maintenance of our treasured resources.]