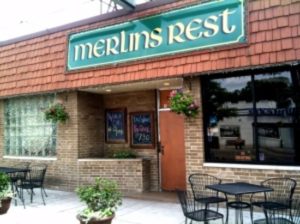 The nice thing about lunch at Merlins is it’s not quite so full, especially if you go a little later. I went on my own for this visit (all my dining companions are either ill or out of town it seems) and yet was seated in a booth made for six. Another bonus—happy hour prices on many drinks start at noon and run till 6 p.m. That’s a pretty generous happy hour. The menu is mostly the same things they have for dinner, just not quite all of them. For instance, I was planning to have a Ploughman’s Lunch for lunch, which I had had before, but alas, when I was there, they only had the Ploughman’s Lunch for dinner. So I went for the Fish and Chips. I had a little side salad with that which was not actually on the lunch menu, but you can get it if you ask. I was briefly tempted by two other things on the menu. One was the healthy option salad, which is a full meal and changes from time to time. This one had roast chicken, mixed greens, fresh radish and boiled egg. That’s a great combination; I know because I make a similar dish at home, on the rare occasions when I eat at home (just kidding).The other tempting thing, which I have yet to try but am definitely going to soon, is the Speyside Pie. The river Spey is a major river in the Scottish Highlands, along which are countless distilleries, so that there is a whole subgenre of single-malt Scotch called simply Speyside. It’s also world-renowned for salmon fishing. The Speyside pie does not contain single-malt, nor salmon, but it is quite the sort of thing vegetarians would be offered at a Speyside gastropub—a puff pastry pie filled with a fontina cheese sauce with mushrooms, leeks and white beans and served with a side of “mash” (mashed potatoes) and other “veg” (vegetable side dishes).

Everything else is super. The whiskey-tastings are a great experience; I have been to one in the past. You have to preregister and pay a deposit. You will have just missed the one on March 1; the next regular one should be April 5. And you will have missed the yearly Irish whiskey-tasting in honor of St. Patrick. Keep it in mind for next year.

Other events of note: Every Monday except the fourth, there is an Intermediate Celtic Jam session at 7 p.m. The fourth Monday of every month is the Pub Sing. Tuesdays, September through April, it’s the Blind Darts League, which is self-explanatory. The Pub Quiz, led by “Minister of Culture” Bill Watkins, is every Wednesday at 7:30, no reservations, but it does fill up quickly, so get there early. On the second Friday at 4 p.m. there are Drunken Knitters (drinking optional, knitting, I presume, is mandatory). And every Friday at 9:30 p.m., there is “open stage style” Irish music and Highland Pipers. Saturdays are for pre-scheduled Live Music, with no cover.