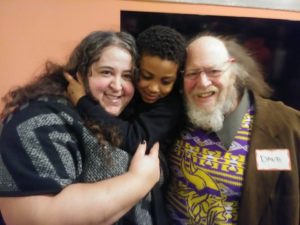 On March 10 the delegates selected at precinct caucuses gathered on a cold wintry Saturday. About 450 of us from the Central, Powderhorn, Corcoran, Phillips and Whittier neighborhoods made it over to the Justice Page Middle School to endorse candidates for state legislature, elect party officers, and generally politic with other activists. I was looking forward to making new friends, learning new things, and hobnobbing with old cronies.

The Senate was not up this year. But both of the House seats were, and long-term incumbents Karen Clark and Susan Allen were both retiring. There were five candidates running for Allen’s seat (62B) and seven for Clark’s (62A). I had attended a candidate forum for the “B” side, the side I lived in, and talked to people who had attended one on the “A” side. It seemed that we had a plethora of qualified candidates. The Rules Committee had been cordial and reasonable and although I had heard some talk about some credential challenges, that was not uncommon. I registered and began to hobnob and politic.

The rules called for us to split into the A side and B side after some preliminary business, and get to the work of nominating candidates, hearing speeches, listening to question-and-answer periods and then moving on to balloting. The B side stayed in the auditorium with the stage, auditorium seats, multiple microphones, secure doors and existing infrastructure of sergeants at arms seating in precincts, etc. They proceeded to their business, elected a chair, nominated their candidates, and then had speeches, question-and-answer sessions and balloting. I expected the A side to join us after they cast their first ballot and we would continue with the business of the full group, pausing only to do additional ballots as they were needed.

As we had no business while our ballots were being counted, we used the time to talk and try to find out what was going on in the other half of the district.

62A
This group was asked to move down to the cafeteria, directly below the auditorium. There were immediately some problems with the venue. There were a lot of doors in and out, so it was difficult to secure the floor—that is to insure that only voting delegates were on the floor. In addition, the tables were middle school dining room tables with attached benches. Larger people needed to sit on top of the tables, and they could not be moved to enable precincts to be able to sit together. It was also significantly hotter and uncomfortable downstairs. There was only one microphone for the chair, none for delegates. Tempers started to fray, at least a couple of people were fighting, one woman was choked by a supporter of an opposition candidate, police were called. The organizers of the conventions later said they did not call the police, but someone did. People calmed down, but tensions rose, if that makes any sense.

Then the Credentials Committee came to the body with another problem. Some people had fraudulently picked up other people’s credentials. There were people there who were legitimately elected at their precinct caucuses that did not have credentials, because someone else did. So everyone was asked to leave the room, then come in, show their credentials, and have their name checked off on a list. This took at least a couple of hours.

While this was going on, the volunteer leadership was meeting with the candidates trying to come up with a solution. More and more people believed that getting to balloting was unfeasible. All they really had to do was speeches, question-and-answer and the first ballot. Then they could go upstairs and finish the convention and subsequent ballots. Could they accomplish that much? The conversation was difficult: The language barrier and an apparent lack of trust and possibly respect between some of the parties was reported.

This process was going on for over four hours!!

All but one of the candidates agreed that they should not try to endorse that day and adjourn. The volunteer chairs went before the body, said that the candidates wanted to adjourn, and asked for a vote to adjourn. Most of the people I have talked to said the vote did not pass. The volunteer chairs at this point said that they were done and walked out. I have been told several things about the meeting. I have been told that the East African folks were calm and patient and that it was the white folks who were angry. I have been told that the problems were all because of division within the East African Community. I don’t know, but at this point the police were called again.

Meanwhile back upstairs
After three ballots, Aisha Gomez was endorsed for 62B in a very unified convention with all of the other candidates except for Rebecca Gagnon endorsing her. I think Rebecca will come along; she did pledge to suspend her campaign and not run against an endorsed candidate.

Then, when those delegates from 62A who did not go home after the fiasco in the basement joined the group, the rest of the business continued. Some party officers were elected, and then about 7 p.m. someone asked formally if there was a quorum. The Credentials Committee said that we needed around 250 for a quorum, and a count revealed that we had only 220-something. There was a lot of talk about trying to call and see if we could get 30 more folks, but as 9 o’clock was a hard stop for the building anyway, it was decided to recess the convention.

On social media, email and the telephone over the next few days, there were lots of things said. One of the gubernatorial campaigns was blamed for the quorum call, but I can’t imagine how it would have been to their advantage to do so, since the convention will surely be reconvened. Charges were made that a campaign aide to one of the campaigns had stolen credentials, and I have been assured that this is true so I will name him, former Minneapolis Council Member Jim Niland.

A week later the Central Committee met. A letter was distributed signed by Rep. Karen Clark, Rep. Susan Allen, most of the 62A candidates and many other prominent 62A figures saying that they did not believe another endorsing convention would be well-attended, safe and useful. I disagreed with it, but it won the day. The Central Committee voted to reconvene the 62 convention on April 7 for the purpose of finishing its business but not to reconvene the 62A endorsing convention.

I also hope that the Central Committee will look into the problems of this convention, not with an eye toward punishing people and finding fault, but with finding unity and improving our process.

Let me add that the Central Committee only has authority between conventions. If a majority of the delegates at the 62 convention votes to have a 62A endorsing convention it could still happen. Let me repeat that. A motion for the 62A delegates to nominate and endorse candidates for the House of Representatives either at that convention or at a future convention would be in order.