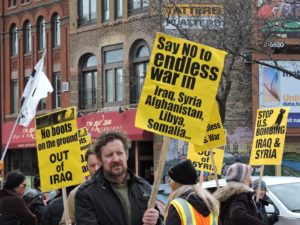 The Minnesota Peace Action Coalition (MPAC), a coalition of peace and anti-war groups in the Twin Cities, is organizing a protest on Sunday, April 15, as part of national spring anti-war actions taking place around the U.S. The demonstration begins at 1:30 p.m. with a gathering at Hennepin and Lagoon Avenues in Minneapolis, next to the library. The march will begin at 2 p.m.

Why now, you may ask?

The Union of Atomic Scientists has been assessing the probability of nuclear war since 1947 when they introduced the Doomsday Clock as a way to represent the risk of nuclear war. When introduced, the Union set the clock at seven minutes to midnight (nuclear war). In 2018, due to Trump’s foreign policy actions and rhetoric, the clock was set at two minutes to midnight. We have only been this close to a nuclear conflagration once in the last 70 years. The threat comes from a possible conflict in Asia between the U.S. and North Korea.

The threat of nuclear war is only part of the crisis we face. The U.S. is currently fighting three wars in the Middle East: Afghanistan, Iraq and Syria. The Afghanistan War, started when the U.S. invaded that country under the pretext of responding to the terrorist attacks on Sept. 11, 2001, is now the second longest war in U.S. history. If it continues for another year, it will surpass the Vietnam War in duration. The Iraq War, started when the U.S. manufactured claims that Iraq possessed weapons of mass destruction (WMDs), has been going on since March of 2003. The U.S. “officially” declared the war to be over nine years later, in 2012, but the war continues to this day with fighting in Iraq and U.S. military operations there. The Syrian War, also called the war against ISIS or ISI, is almost four years old.
If three hot wars were not enough for Washington, the Pentagon also has military operations in Africa, and the White House (through the State Department and the CIA, both agencies of the executive branch) is intervening in Honduras and Venezuela. Finally, the White House has ramped up its rhetoric against Iran.

Foreign policy is not something out there, separated from us by our national borders. These wars are fought at home as well, first economically and then militarily. Economically, the wars are fought against the majority of the American people. Given the regressive tax structure in the U.S., made more regressive by the recent GOP so-called tax reform, these wars are paid for by working and middle-class taxpayers while the rich enjoy the profits from the military-industrial complex. Every dollar spent on these wars is a dollar less that can be spent on schools, infrastructure, housing and environmental protection. Militarily, the wars are fought against the American people via the increased militarization of our police forces.

And why should you care?

In the face of these wars and potential wars, many feel powerless. This sense of powerlessness is not inevitable. Recently we have witnessed an unprecedented wave of action against sexual abuse and harassment on the one hand and, on the other hand, against gun violence. These actions show a simple fact: that the cure for powerlessness is to act, and if enough people act, the world can change, albeit not without a struggle.

There are several reasons why you should care about coming to the demonstration. Demonstrations help build and strengthen the anti-war movement. They generate a broader public discussion about the topics of U.S. intervention and militarism. And demonstrations apply pressure to the political establishment that wants nothing more than to continue their endless wars without public opposition. But perhaps the most important reason to come is for yourself. Act and you will begin to overcome the pervasive sense of powerlessness that afflicts us at this time and place in our history.

If you cannot make it on April 15, there are other ways you can act. First, you can donate money to MPAC to help organize the demonstration. Every single penny will be used to organize this demonstration and similar ones throughout the year. (Checks can be made out to MPAC and mailed to MPAC, c/o Mayday Books, 301 Cedar Ave., Minneapolis, MN 55454.) Second, you can attend one of the weekly peace vigils that take place on Wednesdays, from 4:30 to 5:30 at the Lake Street-Marshall Ave. Bridge, which connects Minneapolis and St. Paul. On March 21, the vigil will mark the 15th anniversary of the U.S. invasion of Iraq. The vigil is sponsored by the End War Committee of Women Against Military Madness (WAMM) and the Twin Cities Peace Campaign, both members of the MPAC coalition. Third, you can join one of the several anti-war groups active in the Twin Cities. A good place to start is with WAMM (www.womenagainstmilitarymadness.org) or the Twin Cities Antiwar Committee (http://antiwarcommittee.org). Both organizations have calendars of events and a variety of ways to participate in the anti-war and peace movement.

Join us for the April 15 demonstration at 1:30! We gather at Hennepin and Lagoon Avenues in Minneapolis. Stop the Endless U.S. Wars! Say no to war with North Korea! Dismantle U.S. nuclear weapons! Fund housing, education, environmental protection, not war!