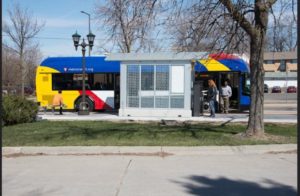 This month is the quarterly schedule change at Metro Transit. Unfortunately, or fortunately, as you may see it, there aren’t many changes this time around that affect the Southside Pride readership area. Routes 9, 19, 23 and 74 are being adjusted so the scheduled times more accurately reflect real travel times on the bus.

While these changes are fairly minor, they do matter, because having too little time on a bus schedule means the bus will be chronically late, and having too much time leads to the phenomenon of buses stopping for several minutes at timepoints (a timepoint is a major bus stop mentioned on the schedule at the top of a column of departure times) waiting for the schedule to catch up to them, so to speak, or just as annoyingly, drivers going about 10 miles per hour in a desperate attempt not to be early.

Many of us get annoyed when we are waiting for buses and they are late, but we often forget that the consequences of a bus leaving early are worse. If you get out to the bus stop when you are supposed to and the bus is already gone, you are going to be late where you are going by however much time it is until the next bus. And then that next bus will be more crowded than usual, because it will be picking up people who should have made it to the one before. This increase in crowding also leads to more stops, and a late bus. Then it picks up even more people, who would have missed it if it had been running on time, which makes the bus later and later, until the one after that is nose-to-tail with it. This is probably what has happened when you see two or three buses in a row on the same route.

No bus driver on earth is ever late on purpose. This would be illogical, since their breaks consist of the time between arriving at the end of the line and when they are supposed to start the other way. Getting there five minutes late means five minutes less time to go to the bathroom or whatever. Sometimes they try to cheat the system by running early, but due to GPS tracking, it is now easier for them to get caught so they don’t do it as much as they used to. The rule is: “There are plenty of reasons for being late, but there’s no excuse for leaving a timepoint early.” Indeed.

Security (both real and perceived) and speed are the two issues that keep people who have a choice choosing private cars over transit. I have come up with a new, but really basic, idea for improving the speed of the bus network. I call it DNE, for “Direct Non-Express.” A DNE route would not fit any of the current categories of bus routes: It would be too fast to be truly Local, but it wouldn’t have stop restrictions like a Limited, or depend on long stretches of freeway running (usually) like an Express. The idea would be closer to taking a car GPS or an online driving directions program like Rand McNally and setting it for “shortest route” instead of “fastest.”

For example, Cedar Avenue doesn’t have a bus route straight from one end to the other. (I’m not counting the 111, which runs twice in the morning to the U of M and twice in the afternoon from there.) The 19 covers it from Washington Avenue to 35th Street. There is no coverage from 35th to 38th. Then a branch of the 14 goes along Cedar from 38th to 42nd Streets, and the 46 from 42nd to 46th Streets, and nothing past 46th, even though there’s a grocery store and other local commercial establishments between 47th and Minnehaha Parkway.

A DNE route from downtown Minneapolis to the Mall of America or even Apple Valley would provide better coverage of Cedar while providing fairly fast service to the aforementioned destinations. Imagine a bus starting on Washington Avenue downtown (which is already faster and wider than most of the streets currently used for buses in the downtown area), going just past 12th Avenue, turning onto the I-35W ramp to Hiawatha, then exiting at Cedar by Little Earth. (Going the opposite direction, I would keep the bus on Cedar to Washington.) The bus would then go straight down Cedar, stopping along the way as requested, to just past Lake Nokomis. Then as Cedar becomes a freeway, it would be non-stop to the Mall of America. I speculate it would be faster than Route 5 via Chicago and competitive with the light rail. More importantly, it would unify Cedar Avenue from a transit user’s point of view from Little Earth to Lake Nokomis.