The Children (fear and hope) 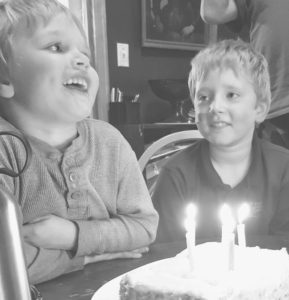 War is waging and we picture the children, 4 years old, 8, 10, 12. It is dark, they’re hungry. Anything could happen tomorrow. There is nothing to count on. They have to believe that somewhere a great big unseen father, or mother, looks out for them. They just have to believe it. They won’t survive if they don’t.  This is the story of the children. Whistling in the dark. Hoping. Since we know that at best our compassion can help only a couple of them here and there, we want to believe that God can help them, or that at least their belief in God can help them. We hope that when a child says, “God, please take my hand,” that God takes their hand and says, “Don’t be afraid. I am with you even when the whole world does not hear. I hear you.” We would like for that to happen.

A child fleeing from danger doesn’t know where his parents are. His father would take care of him if he could, but the boy has lost track of him and begins to imagine that his father is beside him, holding his hand or carrying him. As he falls asleep among strangers he imagines his mother singing to him. Is this the way God says, don’t be afraid?

My friend Marie was kidnapped when she was 3 years old. The woman and the man who took her were actually her biological mother and step-father, but she didn’t know them. They took her to a remote farmhouse. They put her in a high chair and gave her some cooked macaroni, which she couldn’t swallow because she was terrified. She awoke in the night, still in the high chair, hungry, with cold macaroni on the tray in front of her. Her great-grandparents, who had raised her from birth, were nowhere to be found. She called to them. No one came.

Her kidnappers, that is, her mother and step-father as she eventually learned,  gave her a life of trauma, which lived on and on in her body tortured with lupus, non-Hodgkins lymphoma and congestive heart failure until she finally gave up the ghost.

Who will care for all the children who have no one?  We can hope it is enough for God to say, “Don’t be afraid,” but I’m guessing it isn’t. Miraculously, my friend Marie throughout her childhood was able to believe that God was looking out for her. God was all she had.

I have been writing music with parallel narratives for about 30 years. I performed my third set of pieces with narratives last fall, Piano Stories III. There were 10 of them and Southside Pride is publishing one a month until they are done. This piece was recorded by Michael Patrick Coyle and performed by myself on piano.