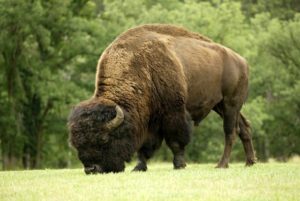 It must have been something I ate. I mean, I’ve always liked buffalo. So mighty, so strong, so historical. But what was it doing in my park? And with 18 legs, or sometimes more?! What a nightmare! Oh wait, this is the beginning of the month of May. This must be a character created for this year’s MayDay event on Sunday, presented by In the Heart of the Beast Puppet and Mask Theatre. Whew! But maybe it was something I ate. Maybe it was that bison jerky I bought when in the Black Hills a few months ago.

Anyway, when this great edition of Southside Pride comes out, the outstanding MayDay event will have come and gone. Thank you to Sandy and everyone else from Heart of the Beast and the park for the always interesting and unique event.

Due to odd April weather, I think some of the usual spring arrivals have not yet arrived, but some have. The Wood Ducks joined the early arriving Mallard Ducks and Canada Geese with two “Woodies” on April 20, and lots more now as there is open water for everyone.

I saw my first Great Blue Heron (by the island) on April 24, and my first Double-crested Cormorant (two of them) on May 1, the same day I first saw the buffalo.

The first butterfly I saw in the park was a Mourning Cloak on April 21.

I had very brief looks at some sparrows and some warblers, both near the lake. I hope I will get good views and figure them out and see lots more of everything soon. Of course the large buffalo could put an end to my or lots of other people’s experiences at the park.

On April 23, we saw a Bald Eagle as we were driving north on Highway 55, between Crosstown/Hwy. 62 and 46th Street. It landed next to another Bald Eagle on a very tall power pole. This was a newly discovered Eagle place for me. Freeways and highways are usually hawk, not eagle, perches. Bald Eagles are usually fall visitors at Powderhorn.

Now to the backyard.

The backyard is doing quite well with the usuals—Downy and Hairy Woodpeckers, American Goldfinches, American Robins, White-breasted Nuthatches, Black-capped Chickadees, Northern Cardinals—with recent additions of Blue Jays and Mourning Doves. And a two-day addition of White-throated Sparrows as they were passing through. The Dark-eyed Juncos left on April 24 with my usual insult tossed at them for being Canadian and with them insulting me for having my mother from Moose Jaw, Saskatchewan.