The change we believe in on Nicollet Avenue 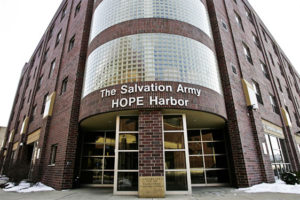 This is a somewhat different take on Nicollet Avenue, South. Last week, I visited the Butter Bakery Cafe at 3700 Nicollet Ave., the ground floor anchor of an apartment building. One of the first things I noticed was that the vestibule was full of flyers, ads and posters, all of a certain millennial, political and hopeful slant. The one that really caused a pause was one proclaiming that the Butter Bakery Cafe is part of a community of Sanctuary Restaurants. Now that’s interesting. A sanctuary church has a legal leg to stand on against wrongful national immigration policies and practices; “separation of church and state” and freedom of religion are enshrined in the Constitution, but it says nothing about the separation of restaurant and state. Sanctuary Cities and States pit the right wing’s shibboleth of “states’ rights” against its war cry of “Immigrants Go Home.” But all restaurants have to offer is their tenuous existence, and the undeniable fact that a lot of them wouldn’t exist if not for immigrant labor, capital and knowledge. Being a self-proclaimed Sanctuary Restaurant strikes me as a brave and radical position to take, for an institution usually more concerned about customers and Yelp reviews. So while I munched my breakfast burrito with guac, I decided to hold up the community, social service, nonprofit, and, to some degree, political work being done on Nicollet Avenue and its environs.

The apartment building in which Butter Bakery Cafe is located, Nicollet Square, at 3700 Nicollet, is a specialized kind of project from Beacon Interfaith Housing, currently managed by well-known social housing organization Common Bond Properties. Beacon Interfaith Housing’s mission is to provide supported housing to young people who have experienced or are at risk of homelessness, such as those “aging out” of foster care. Among its other social missions, Butter Bakery Cafe provides jobs and training for many of the Nicollet Square residents. Located less than a block away is a Salvation Army Store, and just a block or so to the south, the neighborhood starts to feel more quiet and residential, with bars and businesses. Going north from this corner, however, it’s crazy Lake Street with a K-Mart slashing the Avenue asunder, then the exciting but challenging world of Eat Street and at least two major social services organizations serving housing-insecure populations—mainly single adults and families, as opposed to youth. (Although there is overlap, homeless populations for the purposes of providing services are in three main cohorts: single adults, families, and youth.)

Simpson Housing Services, originally a project of Simpson United Methodist Church, is headquartered at 2740 1st Ave. S. It began in 1982 as an emergency shelter in the basement of Simpson United Methodist Church and became an independent nonprofit in 1994. To quote from the website: “Simpson has since become a leading [provider of] assistance to people experiencing homelessness … [Our] programs have grown to include emergency shelter, single adult supportive housing, and family supportive housing … At any given time, we provide supportive services to 100 individuals and 210 families with over 500 children.” Also involved in youth housing, this makes Simpson not only one of the three remaining urban church-based shelters in the Twin Cities (20 years ago there were many more) but also, despite its small size, one of the only ones to work with all three sectors of the homeless / housing-insecure population. Simpson has a paid staff of around 80 people, mostly caseworkers or “advocates,” as they are titled, and also relies heavily on volunteers in its many programs.

Simpson’s 66-bed mixed gender shelter, currently housed in the basement of the 136-year-old stucco church, “has often been referred to as the ‘Cadillac of shelters’ because of its hot meals, clean sheets and relentless focus on helping people connect with community services,” according to a December 2017 Star Tribune article. Last winter, Simpson United Methodist Church, shrinking and aging as most urban congregations inevitably do, voted to gift their aging building to the nonprofit that had grown from their earlier homeless people-serving mission. This will probably mean the shelter can grow and modernize. Simpson Housing Services’ many supporting programs mostly focus on families. Working with landlords and developers from Brooklyn Park to Chaska, as well as about 30 sites scattered widely across Minneapolis, SHS doesn’t just place families in housing and then leave them. For families with children, they use programs of visiting, tutoring and mentoring children from infancy to 8th grade, including a program for children of young parents (18-24), while they also provide support services to 66 West, another Beacon Interfaith project in Edina, which serves ages 16-24.

Near Nicollet, at 2211 Clinton Ave. S., we find St. Stephen’s Human Services, which, like Simpson Housing Services, began as a mission serving the homeless in their urban church, St. Stephen’s Catholic Church.

Although St. Stephen’s began its mission of working with the poor and homeless in the 1960s, its shelter didn’t open until 1981, just one year before Simpson’s shelter.

Both shelters have similar size staff, and both supplement that with volunteers.

Whereas Simpson focuses its housing program very much on families (they do house singles too) and its shelter for single adults serves both men and women, St. Stephen’s original shelter was for men only, while their additional programs focused on serving non-shelter-based populations through Alliance of the Streets back in the 1980s, the publication of a Handbook of the Streets (still in print today!) and, since 2009, its unique Street Outreach program, followed in 2012 by a Veterans Outreach program. Nowadays St. Stephen’s Church is still involved in social programs, and has a largely Latinx congregation, but is not very connected to the nonprofit it created, unlike Simpson’s closeness between the church and the housing service.

St. Stephen’s took over the First Covenant shelter in downtown (a mixed gender shelter) in the winter of 2017. This was operated as a winter-only shelter but will now be operated year round.

I spoke with Chris Knutson, who is one of the five workers on the Street Outreach team. He began as a shelter advocate for one year, before moving to the Street Outreach team two years ago. Chris is a millennial himself, or at least appears to be, and is a socialist in the same organization as me, which is how I know him. He acknowledges that social services organizations like St. Stephen’s, even with a motto of “ending homelessness,” are not really able to end homelessness systemically. “Ending homelessness under capitalism is impossible,” he said. “We have to just focus on ending homelessness for individuals we are serving.” That’s where the hopeful and pragmatic part kicks in, to balance the oftimes bleak aspect of the political. The work that the team does is just what it sounds like—reaching out to people they encounter in the streets. They are not emergency responders, but they do respond by connecting people to housing, health and other resources to get them stabilized. Some clients may go to a shelter that night, but they are not required to. Some may prefer to stay on the street, or some might be trying to find supported housing but not want to go to a shelter in the meantime. Once every three months, the team does an “overnight count,” riding the LRT and visiting the sites where homeless people camp and congregate, such as around Target Field.

Recently the Street Outreach team has partnered with a couple of other organizations and it has really enhanced their services, according to Chris. One is Health Care for the Homeless. The team often encounters health issues beyond their skill level (although they do routinely give out Narcan, in the case of opioid overdoses if needed). With this partnership, they can better triage who needs to be in the hospital, and offer on-the-spot wound care and other health assistance. The other partnership is with American Indian Community Development Corporation (AICDC). AICDC operates two culturally specific housing alternatives for formerly homeless Native Americans—Anishinabe Bii Gii Win and Anishinabe Wakiagun (for “chronic inebriates”) as well as offering regular housing at Many Rivers on Franklin Avenue, a homeowner and home loan service, a credit repair service, and much more, all specific to Native community needs.

We’ll end our survey near the south end of Nicollet in Minneapolis: The Lift Garage at 5925 Nicollet Ave. “is a nonprofit aimed to move people out of poverty and homelessness by providing low-cost car repair, free pre-purchase car inspections, and honest advice …” This innovative but very effective program to break one of poverty’s most pernicious cycles, the housing / job location / commuting conundrum where one tiny break in the chain, which is often an old, dangerously unmaintained car, will cause the whole structure to crumble, is only a few years old but is already having stellar results. In just five years, they have completed 2,200 repairs for 1,045 people, saving them a total of $825,000.