FINDING MY WAY: End of my rope 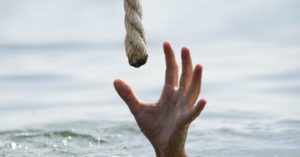 BY ASHLEY THE GREY

As a former attorney, I have walked in powerful shoes. Gained respect by the mere title “Attorney at Law.” People wanted to know me. I was asked to sit on boards for nonprofits and odd museums. I had been taught that being a lawyer was the “Ultimate back stage pass.” And it was. I had my own practice. I could literally “make it rain.” Making it rain means I could bring in clients through sheer charisma, chatting folks up and liberally passing out my business card. I could stand up for my religious beliefs. I did bankruptcies because they are biblical. In Deuteronomy 15:1 and 2 it says, “At the end of every seven years you shall grant a remission of debts. This is the manner of remission: every creditor shall release what he has loaned to his neighbor; he shall not exact it of his neighbor and his brother, because the LORD’S remission has been proclaimed.” (King James Version, source https://bible.knowing-jesus.com/topics/Bankruptcy).

I enjoyed my growing success for a while. I even worried about having a caseload that was outgrowing my small independent practice.

Something changed in 2010. The cause of that change is not a public matter. I’ll share with you freely the results. I was given a new name. Schizophrenic. Yes I did hear voices and see demons. I was on the verge of “ending it all,” meaning, I wanted a way out. And yes, a permanent way. Obviously I did not do that. Back to the matter at hand. The new name was Schizophrenic, and just for seasoning add PTSD, Mixed Personality Disorder and Major Depression. My work was my life. The day I received those well-earned labels was the day my power was taken. Old “friends” feared me. Others, even close family, began to treat me as though I were “special.” But not special in a good way. But like I had lost 100 IQ points. I wasn’t trusted by anyone. Hated by others.

The labels are permanent. I cannot escape them. They follow me everywhere. It seems as though I had achieved the ultimate “Scarlet Letter.” My medical records read like a horror story. One tragic event after another and 15 hospitalizations in various mental health units. A mental health unit can be a safe place for a person with my labels. The paranoia, the self-loathing, the muttering/talking aloud to myself, I could not control. At one point I even became homeless by choice. I traveled across the country by Greyhound Bus. At each stop I pondered getting off the bus during the bathroom/smoke breaks and walking away into the night. Not because I wanted to die but because I wanted a fresh start. Kind of like a bankruptcy. I wanted to be where no one knew my name. Where the faces always changed. I knew I could always find a home under a tree. Trees do not fear me. Humans do. Obviously I am no longer homeless. By will or power of God I made my way back home. But even there, I was not safe.

No, I was not physically injured or verbally threatened but I was misunderstood and disrespected. By everyone. I wanted to be “Me.” I get glimpses of her. The me before the demons struck. She had boundless energy. She looked for challenges. She set goals and accomplished all them. I She was never satisfied. When I she accomplished one goal, I she created another one that felt just out of reach. That was intentional. That “just out of reach goal”? I she accomplished it each time. This is all reminiscence.

The new labeled, disabled, disrespected, erased and taunted me was suspected of everything and capable of nothing. My goals became increasingly … what is the word … ah that’s it: “simple.” When I say “simple,” I mean just that. Friends became dreams. I have none. A shower. Yes a simple shower was a major goal. And on certain days I could not even do that. My other goals became taking out the trash and the recycling. Knowing the demons would be screeching at me from the sky. Leaving the house for any reason became terrifying. Some days my goal would be to stay out of bed for two hours a day. Other days my goals were even more pathetic. Wake up and get to the toilet was a need. I had lost and been bullied out of my wants. I wanted to exist. Just to be. But even that eludes me. I never really know who I am or why I suffer. I think about Karma. If I did have past lives, who was I? Hitler? Stalin? Jeffery Dahmer? Or worse. Was I the evil that tortures all creatures on earth? The one who decided who lived and who died arbitrarily? I used to have an identity. No more. No.