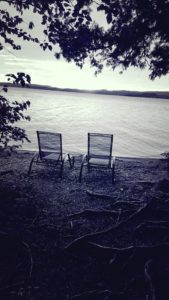 “I’m having an affair with a married man,” my friend Allie, who is a pillar of respectability, told me.

“What???” I said. Of course I had to act surprised, but anybody who ever saw her and her husband together would NOT be surprised.

Could they ever laugh a little bit? Forget the horrible cares of life for one tiny second? I don’t think so.

For some reason she felt like telling me what happened.

She said she just made a big leap one day when she met a guy for coffee she had known for a long while. She knew he was crude and rude, devilish, big and loud. But when he kissed her hard on her cheek and hugged her enthusiastically as though he really liked her, and when he said he’d like to tickle her and watch TV together, and when their admiration for Kierkegaard matched and when he asked her what she knew about Saudi Arabia and the hijackers and then listened respectfully to her answer, and when he confided that he had lost his infant son in a freak accident, her heart burst open and she made the leap. She fell in love. She had compassion for his life. She said she’s always been willing to see beyond his coarse, roguish exterior.

They said a lot of silly things to each other and acted goofy as though they were not quite grown up. They spent a day together in a very hot motel room. Afterwards, he gave her a book, about love. It has taken them years to find out what this relationship means to them, she said. Their marriages to other people have nothing to do with it.

Harville Hendrix, a TV love expert, says in his book that a very large percentage of legally married people are actually divorced. They’ve gone their separate ways. Yet, if you have a spouse, you have someone legally bound to look out for you, help you with your shoes, your food, your rooms, the forms you have to fill out and your brushes with death. It’s the buddy system.