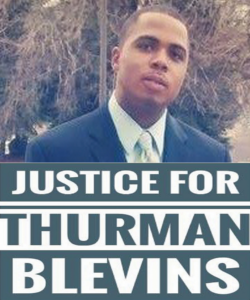 On Saturday afternoon, June 23, around 5 o’clock, Thurman Blevins was walking with his girlfriend. There was a baby stroller and a baby nearby. Witnesses say Blevins was drinking Amsterdam Vodka out of a bottle.

Officers Justin Schmidt and Ryan Kelly pulled up in their squad car responding to a 911 call that said shots had been fired in the area. According to witnesses, they confronted Blevins and told him not to move. They tasered him. He ran away. They followed him down an alley, shot him multiple times and killed him.

The BCA and the police say they recovered a 9 mm handgun at the scene.

People want to know if the police officers were justified in killing Blevins.

Was he committing “suicide by cop,” running away, with a gun in his hand, shooting at cops?

Much of this will be cleared up when the city releases the officers’ body cam tapes that recorded the incident.

Mayor Frey said, “The city will be releasing the body camera footage from this weekend’s officer-involved shooting, once these two conditions are satisfied: The family of Thurman Blevins must be consulted. And the Bureau of Criminal Apprehension needs to have finished interviewing key witnesses.”

The BCA took almost two months to complete their investigation of Officer Mohamed Noor’s killing of Justine Damond, so it will be at least two months before the BCA releases a report on the killing of Thurman Blevins.

There is no logical justification for that long a delay.

The witnesses have all given statements to the police. The two officer-suspects in the homicide were allowed to talk to each other; they were not kept in custody; and they were given three days to consult with a lawyer to prepare a statement. Of course, most suspects in a homicide are kept isolated and in custody and questioned immediately.

Now that all the statements have been gathered, there is no longer any reason to believe the investigation could be tainted by the early release of information. It is understandable that the BCA would not want a witness’ statement to be made public before all the witnesses have testified, because one description might color the judgment of another, later witness. But once all the witnesses have given statements no one statement can influence another.

The BCA doesn’t want to release the body cam tapes until they issue their report—their interpretation of the facts. It’s cops investigating cops. They’ll take their time. They want tempers to cool. They don’t want to add fuel to the fire.

But the public is inflamed.

Mel Reeves wrote in his blog: “Here we go again, or so it seems. Another human being, 31-year-old Thurman Blevins has lost his life at the hands of the police, in this instance the Minneapolis police. In the last two weeks, 17-year-old Antwon Rose was shot in the back and killed while running from Pittsburgh police and 24-year-old Maurice Glanton, Jr., was shot in the back while running away from police in Chicago. A small amount of common sense applied to these killings and beatings would indicate that this violence is a not an aberration, but a part of the function of U.S. law enforcement.”

Is Mel Reeves right? Is there a slow-moving genocide of young black men by local police?

We know it was the local police who were the instruments of the Final Solution in Germany. The FBI issued a bulletin in 2006 that warned of white nationalists and neo-Nazis taking over local police departments. Lt. Bob Kroll, head of the Minneapolis police union, is head of City Heat, a motorcycle gang made up of police officers in the Metropolitan area that wear German Iron Crosses and fly Confederate flags. He was the object of a suit by black officers in the MPD (including Chief Arradondo) who claimed he was discriminating against them based on race.

Is this something we should be concerned about?

Now that all the evidence has been collected, shouldn’t Mayor Frey release the body cam tapes so we can judge for ourselves whether the killing of Thurman Blevins was justified as an act of self-defense or whether it was the murder of yet another young black man?

There was an op-ed piece in the Star Tribune on July 3 by Matthew Hagen, president of the Minnesota Fraternal Order of Police: “Please tread carefully before releasing new body-cam video.” [http://www.startribune.com/tread-carefully-before-releasing-video-of-officer-involved-shooting/487272501/]

I completely and without reservation agree with his conclusion: “Both the community and these officers deserve a thorough, impartial and, ultimately, transparent investigation into this incident. They aren’t just police officers. They are United States citizens with the same due process rights as every citizen.”

But I am confident the officers who shot and killed Thurman Blevins will be accorded due process.

We, the people of Minneapolis, need to see the tapes so we can decide whether Thurman Blevins was accorded due process before he was killed. He was a United States citizen, too. We need to see whether the officers exercised proper judgment. We need to review the training the officers have had in the proper use of firearms. We need to assess accountability from the line officer to the chief to the mayor. Because they are supposed to work for all of us, and if they’re working against some of us, then, they’re not working for all of us.