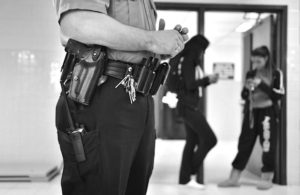 Whenever the Chief’s coffee grows cold and the last bite of the doughnut is taken, a light flashes and a voice whispers, “More cops.” That is the mantra. They will control crime and improve community relations.

It is nothing short of a scam—or, better yet, a shell game.

The union shortens the work week from five 8-hour tours to four 10-hour tours. And good luck getting 10 hours’ worth of effort. This means they show up four times a week. The day hasn’t changed so you have to hire more to cover the same span. Then there is overtime; settlements for wrongdoing; and two-person patrols. The scheme is to keep adding cops to cover the same ground.

And with the extra day off the cops are free to moonlight (in uniform yet, an unthinkable prospect in the NYPD) and deprive the unemployed of jobs they could fill.

Throughout the ’80s—a period of much higher crime levels—we had 700 cops; today it’s 850 heading to 1,000—an absurdity. The managerial challenge is to have fewer cops do more, work smarter and produce (more arrests, citations and faster responses to 911 calls). It ain’t brain surgery. Amazingly, what Minneapolis actually needs is fewer cops, not more.

The really infuriating aspect of all my efforts to control the police budget was the unremitting hostility of the City Council. They regularly accused me of grandstanding. The official resentment of frugality is a surprising development.

And how did the new folks respond? With additions to the bloated cadre of supervisors, demands for more cops and the prospect of hideous settlements, and, oh yes, the creation of specialized units to meet every contingency. Your donkey was stolen? We will create a Donkey Recovery Squad. And we’ll give it a nifty name—Ass Coverage Unit.

You know, there are only 400,000 or so of us, so each dollar counts. How’s paying off the settlements, subsidizing unneeded units, supporting superannuated supernumeraries and other extravaganzas working out for ya?

And the bloat at the top is prodigious. We had two promotions from 2/11/80 to 12/31/88 [the years Tony Bouza was Chief] and we still had too many supervisors at the end.

There were 700 cops in the ’80s and a lot more crime and violence, but there was never ever a call to hire more cops. The police are irrelevant to the levels of crime in America.

The union—running this show and the previous one, throughout the ’70s—is having a good time. Under metempsychosis, the spirit of Charles Stenvig alights on his successors at the union’s helm.

Aggressive police tactics like decoys are abandoned because black leaders (politicos and ministers) hate the operations. And, indeed, it results in a disproportionate arrest rate of black males. These same leaders identify the police as the enemy, fatally injuring any attempt at recruiting black males.

But don’t let that lead you into believing police departments are having the least problem recruiting males and females everywhere. The union has secured such salaries and benefits as to make “The Job” (as if there could be no other) wildly attractive and competitive.

There is a coarse NYPD phrase for what the union is doing to you and the idiot politicians buying into its scams—they’re pissing all over you and telling you it’s raining.

You could stop police abuses—everywhere in this nation—overnight if you: 1. Made cops financially responsible for demonstrable depredations, and 2. gave chiefs the power to identify thumpers, document their acts and fire them.

I haven’t the slightest hope that the politicians—who are really in charge—will adopt any reforms vaguely resembling anything I’ve said. But hope springs eternal even in the most cynical breasts.

In the meantime, keep the umbrellas handy and wear slickers.