Open Streets on Lake and Minnehaha 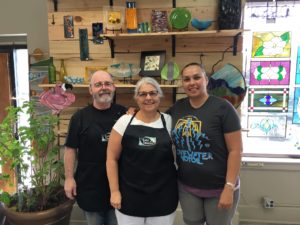 Open Streets Lake-Minnehaha is happening again this year. The date is Sunday, July 22, from 11 a.m. to 5 p.m. The route is roughly the same as last year: East Lake Street from Elliot Avenue to Minnehaha Avenue, then southeast on Minnehaha to the entrance to Minnehaha Regional Park at Nawadaha Boulevard. This handy guide to what happened last year and what to look for this year is our encouragement to get out there on bicycle, skateboard, or on foot, with or without your animal companion, and enjoy the car-free festivities of food, music and dancing in the streets, if you’re so inclined. As ever, Metro Transit is providing a free bus pass for the day so that participants can easily take part. (Buses along the route will run on parallel streets.) Here is a shortcut link to get your bus pass: https://bit.ly/2lys5Q3

Open Streets has radical roots. It was started by a young Colombian activist over 40 years ago in Bogota, Colombia. From there the idea spread throughout South and Central America and eventually came to the US. In some cities, including U.S. cities, the first Open Streets events, which are called Cyclovia (“cycle-way”) in Spanish, were fueled by radical anti-automobile anarchists, and were not sanctioned by the cities where they happened. Now Open Streets as an idea and a movement is gaining general acceptance, especially in cities such as Minneapolis, where there is an existing biking, skating, walking, sustainability-liking community in place. Other U.S. cities that have a similar type of event include Portland, Maine, Pittsburgh, Pa., New Brunswick, N.J., New York, N.Y., Atlanta, Ga., Madison, Wis., San Antonio, Texas, Portland, Ore., and Los Angeles, Calif. Last year in Minneapolis, more than 101,000 people participated in Open Streets events, which included a total of 807 street spaces along the eight 2017 routes.
Open Streets 2018 is one event down from previous years with only seven summertime events. (The missing event is Downtown.) It seems to have shifted later as well, with only one event (Lyndale Avenue) having been in June, and three of the events in September. But if the events are getting slightly fewer, they are getting much bigger and better. The core of organizational sponsors remains roughly the same—Our Streets Mpls (formerly the Minneapolis Bicycle Coalition), the city of Minneapolis, Metro Transit, and Blue Cross / Blue Shield Center for Prevention—along with several other organizations (a couple of which are new for this year), including Hennepin Healthcare, AARP Twin Cities, Xcel Energy, Centerpoint Energy, MTN (Minneapolis Telecommunications Network), All Energy Solar, and AT&T / Direct TV. In addition, each event has a set of local sponsors, which in the case of East Lake / Minnehaha includes KFAI Radio, Castle Remodeling, Renewal by Andersen and YWCA Minneapolis.

Some of the highlight vendor sites of last year’s Open Streets Lake-Minnehaha (starting from the beginning of the route) were Midtown Global Market and many of its vendors, Midtown Freewheel Bike Shop, Tempo Afric, Quatrefoil Library, Tamales y Bicicletas, In the Heart of the Beast Puppet and Mask Theatre, the Somali Museum, Ingebretsen’s, YWCA Midtown, the Midtown Farmers Market, Humanize Hi-Lake, Minnehaha/Lake Liquors, the Hub Bike Co-op, Peace Coffee, The Fix Studio, E’s Emporium, Time Bomb, Junket and other vintage shops on the Minnehaha Mile, as well as restaurants such as Gandhi Mahal, The Howe, Dumpling, and Parkway Pizza. We expect all of these and some we didn’t get to mention last year, such as Glass Endeavors and Moon Palace Books, will be participating again this year. There are of course a few new vendors to consider, in addition to some that may have disappeared. Also the overall Open Streets program is rolling out a new section that was “borrowed” from the neighborhood association-hosted Nicollet Avenue Open Streets: an Artisan Market area within which small, home-based arts and crafts vendors can get a spot for as little as $25, one-third the amount of the next higher category of vendor spot. Even though vehicles generally are banned from the streets, food trucks, since they stay parked for the event, are permitted at a slightly higher fee than other off-route vendors. It appears the food trucks will all be gathered into a “food truck zone,” making it easier to choose.

Last year, Glass Endeavors, 2716 E. 31st St., a glassworkers’ resource with supplies for sale and classes at various levels, as well as a retail and service component, had a participatory booth on Minnehaha Avenue involved in making a mosaic. This year, they are really raising their game with a fruitful partnership with Native American Community Development Institute (NACDI) and NACDI artist Natchez Beaulieu. We spoke briefly with Zoi Sandy, who, with her husband John, owns and operates Glass Endeavors. She said it was Clyde Bellecourt, an acquaintance of John’s, who suggested they get in touch with NACDI when they mentioned they wanted to make connections with the Native community. Ellen Sweetman, marketing manager at Glass Endeavors, explains more about how the partnership will work in terms of Open Streets. “Natchez Beaulieu,” Ellen says, “was chosen through sponsorship to add another medium to her repertoire and will be showcasing her stained glass instruction at the Open Streets Event.” Beaulieu is new to stained glass, and is currently taking an introductory class. On the avenue at Open Streets, people can watch Beaulieu in the act of creating a stained glass panel in her characteristic style, which is informed by traditional Ojibwe floral designs and also by influences from beadwork traditions. If, inspired by Beaulieu, you want to do some hands-on work, inside Glass Endeavors’ shop there will simultaneously be a public demonstration and opportunity to make a simpler, so-called “fused-glass” piece of your own. You can see some of Beaulieu’s work on Facebook on her Midnight Artist page at https://www.facebook.com/bossikwe/ or in real life at the Woodland Crafts Gift Shop on Franklin Avenue. (Glass Endeavors and Beaulieu will also be at Franklin Open Streets.)

Some new things to look for this year: Even though Moon Palace Books was on the route last year, this year it’s moved closer to Lake Street, in a bigger space, and now has a café—Geek Love. So expect new and exciting things on their lovely new sidewalk. A new business on Minnehaha is Minnehaha Scoop, an ice cream shop at 3348 Minnehaha. They were just opened the same week as Open Streets last year, so they will probably make their big entrance this year. It was a similar case of timing for Heroic Goods and Games, 3456 Minnehaha, which is part of the vintage mile on Minnehaha, but specializing in board and video games. We can’t wait to see what they have.

Here are some last minute participants we just stumbled upon: In line with Metro Transit being one of the sponsors, it’s good to know that two key organizations will have an information table at Open Streets. One is the worker’s union—Amalgamated Transit Union 1005. The other is the consumers and advocates group Twin Cities Transit Riders Union, with opportunities to join and get involved. 4PSR, a Pit Bull Rescue organization, will have a spot (location unknown) with loveable pit bulls to play with. Solid State Vinyl Records, in partnership with Minneapolis Craft Markets, is a block sponsor of the 45th to 46th Street block of Minnehaha. They will have another craft market there, along with live music and even more food trucks. And finally, we noticed last year that, like street performers and musicians, who don’t have to pay a fee to participate, politicians and even some political causes found it more effective to just get a team of volunteers together and mingle with the crowds, asking for a vote or a signature, handing out literature, or just delivering a message. This being a midterm year and with hot races coming up for everything from School Board to the U.S. Senate, we expect to see a lot more of the same this year.