Lyndale Avenue in stasis and change 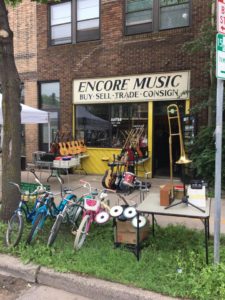 As I was on my way to check out Encore Music, I had to walk through a deep mud patch on the sidewalk, because some heavy construction was going on. It seemed to be one of the stately old mid-size houses that liberally dot Lyndale all along the stretch from 24th southward, so I looked up to see what they were doing. They appeared to be building additional levels onto the top of this house. “How strange is that going to look?” I thought. Then I chanced to glance across the street and saw how it would look, more or less. I don’t know if what’s happening on Lyndale really counts as gentrification, but the look and feel of the neighborhood is changing. It’s been a long time since this was a really affordable place to live anyway. We are taking a look at the landscape of change on Lyndale Avenue South between Franklin Avenue and Lake Street. We will look at Survivors and Thrivers, recent Victims of Change and a few promising Newcomers.

Survivors
These institutions are still hanging in there, some after 40-plus years. Their glory days may be behind them, but somehow they have managed to reinvent themselves just enough to stay alive in the 21st century but not so much as to entirely change. Probably the most amazing is the CC Club. Full disclosure—although I am well aware of the iconic status of this old bar and music venue, I have never been there. Besides being a hangout for late 1970s and ’80s bands such as The Replacements, the CC Club was a place where smoking was de rigeur, so it was expected to be the first ship to go under when the smoking ban took hold. It suffered, but persisted. At some point, it was bought out by the owners of the nearby French Meadow, and the food offerings were upgraded. A smoking patio was added.

Another notable survivor is the whimsically named Leaning Tower of Pizza. Only minor concessions to change were needed to keep this old staple of fast food in the picture—delivery by Bite Squad, adding Buffalo wings, and more recently, fried cauliflower, to its appetizers, offering a decent craft root beer.

The saddest of the survivors is the Loon Grocery, which is now split into two halves, neither one of which is very inviting. The deli half sells gyros and other urban fast foods, so not really a deli. The grocery half has nothing that would sustain life for very long, and seems to be surviving mostly on vaping paraphernalia and lottery tickets.

In the theater world, where the Victims of Change are the norm, the Jungle Theatre is still going strong. Along with the Huge Theatre just south of Lake Street, it’s a popular venue for the Fringe Festival, and also has a resident company and a full seasonal schedule.

The other survivor is Encore Music, which has been owned and operated by Chad Speck for quite a while and has been at its location of 2407 Lyndale Ave. for even longer. Chad started at Encore as an employee in 1993, when he was in his 20s. At that time, Encore was one of two remaining outlets in a small chain of stores that sold new and used guitars, a variety of instruments, amps and other accessories. Knowing absolutely zilch about this industry, I went to talk to Chad briefly and get a feel for the store. It definitely has that garage-sale-meets-vintage- shop feel to it. It’s cluttered, but with an order sensed beneath it. It’s unpretentious and serious, not really a place for aimless browsers. Although the bulk of their business is amateur and aspiring musicians, and Chad claims to really like advising the first time guitar buyer, there are a few big names counted among Encore’s loyal customer base, although Chad would not name-drop. In music equipment as in so many other retail lines, it’s online shopping that has really hit the brick and mortar shops. Encore Music did try online sales for a brief time, but it didn’t really work for them. I think a big part of selling a used guitar is having the customer try it out, and doing a setup for them when they decide to buy. I asked Chad if a used guitar had any advantage over a new one besides price, and he confirmed that, yes, a lot of people prefer a well-used old guitar—it’s “broken in,” doesn’t have unknown quirks to trip you up. Nowadays Encore Music’s only online presence is its Facebook page and its Yelp reviews and a listing on the ReUse site promoting sustainable recycling businesses.

So, what about the Thrivers?
One of my favorites is the French Meadow Cafe and its extension, Bluestem. French Meadow has been doing this organic, locavore, high-quality thing since before it was a thing, but their offerings are still popular and fresh. It remains one of my favorite bakeries in town, and the cocktails aren’t bad either.

And then of course, there’s the Wedge. This old co-op business, a survivor of the co-op wars, and of other small and large challenges along the way, is now a dominant force in the grocery business. With delivery service via Instacart, an extension cafe and quick stop shop at the Wedge Table on Nicollet, and having merged with Linden Hills Co-op to the south, the Wedge is the co-op for everyone.

And another business near to my heart is Once Upon A Crime bookstore, which we covered in a previous article (August 2016 Nokomis edition). Their main tools in the battle against the online retail juggernaut (which is especially effective in the book world) are two: a really good email newsletter, and frequent in-store book signings, book launches and other events.

Victims of Change
The most prominent of these have been in the theater and arts world: first, Theatre Garage, which has been torn down and is now being replaced by yet another high-end, shiny, boxy high-rise “mixed use” apartment building, and then, Intermedia Arts, which has ceased to exist as an organization and whose building is up for sale. One of the tenants of Theatre Garage was a church called Spirit Garage. They have relocated to the Hook and Ladder performing venue at 3010 Minnehaha Avenue, former home of Patrick’s Cabaret. I am not sure, but I think maybe Patrick’s Cabaret, which had been officing at Intermedia Arts, may be another victim of its passing. A number of queer artists and artists of color who had been part of or associated with Intermedia Arts have formed a new organization called Catalyst, currently renting space at Open Eye Figure Theatre.

Newcomers
In this promising world, food is the thing. One of the shiny new boxes has a sushi restaurant as its “anchor tenant” and at first I thought “ho hum.” Then I saw these magic words—All You Can Eat. I have no idea how much sushi I can eat, but I bet it’s a lot. You will hear more from us about Kyoto Sushi, 2841 Lyndale Ave.

A very recent newcomer—so recent they haven’t quite moved yet—will replace the lost lamented Ecopolitan, a pricey but imaginative vegan raw restaurant in the Ecopolitan building. The building will retain the name, but the new food source is Vegan East. This is a vegan bakery with very fancy cupcakes, cheesecakes, etc., that began less than a year ago in White Bear Lake. They have been so successful that an expansion into the urban area was needed. This is another place I will be hitting up very soon.

And finally, Minneapolis’s latest entry into the new model of combining a food hall, kitchen studio and food business incubator, the Lynhall, at 2640 Lyndale Ave., is a bit over a year old and still standing. It has had mixed reviews but will probably survive by offering a fast casual but stylish spot for residents of the neighborhood to congregate and eat.