Fourplexes will sink too 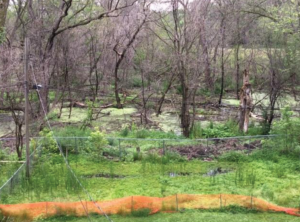 It’s election season but it’s not candidate yard signs dotting the streets of Minneapolis—it’s signs advocating for certain positions on issues. The “Save Hiawatha Golf Course” are most popular in my neighborhood, but now I’m seeing the red and white “No Bulldozers” taking a stand against the proposed multi-family housing development in the community.

There is no shortage of issues, and unfortunately, the high groundwater threat is still not being addressed.

While my focus has been on Lake Nokomis and the immediate area on the west side of the lake I recently learned how bad the groundwater and flooding is for the neighbors surrounding Solomon Park. I had a chance to talk to Teresa Miller, who has lived next to Solomon Park since 1996. She shared photos of her backyard from when they first moved in—with a border of fully grown, mature trees between her property and the park. One of the biggest factors in her choosing that home was those trees. She loved that she could be in the city but still have the privacy and view those 100-year-old trees provided. Today those trees are gone. She has had to invest thousands of dollars to landscape her backyard. Ms. Miller’s new landscaping entailed trucking in a clay/dirt mix to raise her yard and planting a willow tree along with two river birch trees. In photos there is a noticeable drop on both sides of her yard—where her neighbors did not invest in the additional landscaping. She said it is very common to see cattails randomly growing in yards on her block. I was shocked as I stared at her photos—I didn’t even know you could plant a willow tree in the middle of an urban backyard since I’ve only seen them on the banks of lakes. So what does it say about the terrain if the tree is thriving?

Even though I drive the frontage road between Solomon and Highway 62 several times a week (it is the fastest route between my house and Target!) I hadn’t noticed until the other day that the trees in the center of the park are all dead. I stopped because the scene actually looked like a backdrop to a horror movie. Then I noticed the disgusting, swampy smell too. Stagnant water and dead trees. It’s all getting too familiar.

I thought my last article recapping the March 21 meeting at the Nokomis Community Center was the kickoff to finally being able to share useful information and updates about all of the Nokomis/Hiawatha flooding. After hearing from the United States Geological Survey (USGS) it seemed obvious that the community and our elected officials were on board to find funding and make the study happen to resolve the high groundwater threat to our community. I felt inspired that everyone came together and was ready to make progress toward a solution.

It’s not turning out that way.

At the July 25 Minneapolis Park Board Meeting to address whether or not to continue pumping water at the Hiawatha Golf Course, Representative Jean Wagenius shared testimony with the Park Board to hold off on making a decision regarding pumping until further studies were done. The Park Board went on to vote 6-2 to stop pumping, ignoring the pleas for information, even from our local state representative.

I reached out to get an update from my City Council Member Jeremy Schroeder as well, but did not receive a response. Based on the mass e-email newsletter correspondence I have received from Council Member Schroeder it looks like his focus is on the Minneapolis 2040 Plan. I don’t think there is anyone in Minneapolis that doesn’t want people to have access to affordable housing, jobs with a livable wage and reliable transit, but if our city’s infrastructure is failing how can anyone live or work in Minneapolis? Why are trees dying? Why are previously dry basements flooding? Why are residents having to plant willow trees in their backyards to protect their landscaping? Is it the development at 66th & Cedar? Expansion of the airport? Changes at Taft? Is it because of the weir at Lake Nokomis? Can we blame development all along Minnehaha Creek? Why am I still asking these questions two years after I started? We don’t have the answers so it is impossible to find a solution. Back in March I had a lot of optimism for our leaders to come together to find the funding for a USGS study. Today I am less optimistic, but I am still committed to working toward answers and solutions. No matter how you feel about fourplexes on your block, they will flood like anything else if the groundwater issues aren’t addressed.