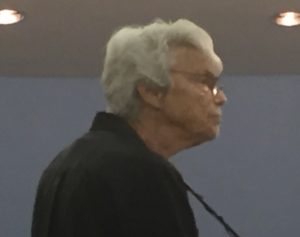 At its meeting July 25, the Park Board finally responded to a question from its Lake Hiawatha Community Advisory Committee. The CAC asked whether future plans for Hiawatha could include an 18-hole golf course. The Board answered: “The Board of Commissioners intends for the CAC to bring forward a solution resulting from the master planning process that includes, at a minimum, a flood-resilient and ecologically-driven nine-hole configuration for a golf course on the property.”

So, the Board didn’t say no to 18 holes but said nine holes at a minimum.

But they also said, “The master planning process shall pursue a reduced pumping scenario.”

So, the struggle goes on.

No one is quite sure how much they want to reduce pumping. How much of the golf course and surrounding homes do they want to flood? The DNR would probably give them a generous allowance on the amount they have to pump, but some on the Park Board and staff seem driven by a vision of Lake Hiawatha as some ancient swamp. They want it to return to a natural state.

Never mind that there’s a storm tunnel that dumps tons of sand from city streets from Lake Street to 43rd Street, from Chicago Avenue to 28th Avenue every year into Lake Hiawatha, and that has changed the maximum depth of Lake Hiawatha from 33 feet in 1929 to 14 feet today. That’s not natural.

Never mind that there’s a 10-foot dam at the outlet to Minnehaha Creek.

State Representative Jean Wagenius said to the Board: “Historically, water flowed freely out of Hiawatha on its way to the Mississippi. But now we have built structures that impede the flow. While very localized studies have been done related to pumping, the larger question of the impacts of creek levels on Hiawatha and its ground water have not been answered.”

The Park Board continues to refuse to recognize the artificial, man-made barriers that are raising the water level of Lake Hiawatha and are causing the flooding.

Hennepin County Commissioner Peter McLaughlin also spoke to the Board. After the meeting, he said: “This vote is a travesty. They’ve created this phony pumping variable to force the solution they want: destruction of any 18-hole option. The budget doesn’t work and they destroy the historic course for African Americans in a callous disregard for history and community.”

The Community Advisory Committee seems very sensitive to the concerns of people in the neighborhoods, and they are articulating those concerns in a strong and correct manner. But if their efforts to preserve our vital resources fail, then people in South Minneapolis must seek remedy in the courts. 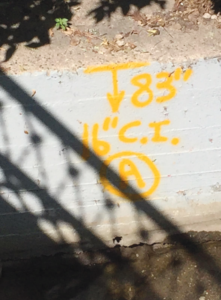 I contacted CenterPoint Energy about their pipeline, and Rebecca Virden, the manager for public relations, told me: “A crewman went out early this morning. If you want, I can meet you out there this afternoon around 2:30 p.m. We had an employee in waders check this out this morning and he said the pipe is 6 inches to 8 inches below the creek bed and approximately 30 inches below the water surface. The abandoned main pipeline is adjacent to the bridge. Per our staff, there is a duct constructed over the top of the area where our pipe is buried. Ownership of the duct is unknown. The duct could be the primary reason for blocking the creek.”

I met Ms. Virden at the bridge and took a photo of the CenterPoint markings.

If it can be shown that the CenterPoint unused pipeline is obstructing the flow of water out of Lake Hiawatha, then the people of South Minneapolis should get a Writ of Mandamus from District Court ordering CenterPoint to remove the barrier.

If the 27th Avenue dam/weir is artificially raising the water level of Lake Hiawatha, then the Park Board and the City of Minneapolis should contact the U.S. Army Corps of Engineers who built the bridge in 1964 and ask them to take it down.

PHOTO CAPTION: Representative Jean Wagenius urged the Park Board to not make a decision about stopping pumping until they have all the information.