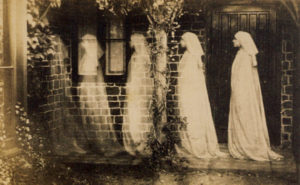 Maybe it’s because of the ghosts in “A Christmas Carol,” or maybe it’s my majority Irish heritage, or maybe it’s just the natural feeling that comes around with all the sacred holidays, the longing for light’s returning, the pull of reuniting with family, but I can’t help but associate December with ghosts. Ancestral ghosts, hungry ghosts, ghosts of Christmas past. These are not the ghosts of horror stories, these are what I call Kindly Ghosts. They are ghosts we know, and almost understand. But most importantly, they are our future, unless we find the trick of living in these corporeal bodies forever. How must we live our lives, and plan for the end of our lives, so that our descendants will see us as kindly and giving ghosts, rather than hungry and demanding?

My own mother showed me a way to do it. I may not do it the same way, but it’s the concept, or the outline that she gave me that’s precious. My mother passed away on Dec. 14 two years ago. Although I was not there when she drew her last breath, I was gifted with the ability to spend five days with her as she declined toward the silence, and left her with a tearful embrace four days before the end. And although we had at times a fraught relationship, I will always cherish those last memories of her and treasure those weird things she said to us. She was regressing back to a childlike state even before her last illness, and my youngest brother had become the legal guardian, essentially, of both our aging parents. Somehow, almost all of our scattered family managed to get to her bedside. She spent a couple of days in a hospital in Anniston, Ala., where my brother valiantly fought off the doctors who were intent on ignoring her very clear advance directive, and we brought her home to lie in her own room and to be on home-based hospice. She subsisted on popsicles for a few days, then refused even that, and lived on morphine and a few drops of water. She had it in her head, as my sister from Kansas and I appeared at her side, then our other sister from Alaska, then my daughter, her oldest grandchild, from Oregon, then finally my son, from Atlanta, that we were all on a family vacation trip together, and her illness was interrupting it. “I’m sorry I got sick and messed up the trip,” she said.

In the days after her passing, my middle sister, Cindy, the one from Kansas, stayed on to go through her “stuff” and help my Dad and my brother decide what Dad’s next steps would be. This was where the old Mom, the practical and organized and thoughtful person she was before the mental decline, came to the fore. Cindy had barely anything to do! All of Mom’s legal papers, photos, will, and last instructions—no funeral, which surprised me a lot, since she was a hyper-traditional lifelong Methodist—were in impeccable order. C. asked me and my daughter what she should do with Mom’s handwritten recipe cards and sheets, and we decided they should be sent to Aimee, my daughter, for scanning to preserve them digitally, then sent to me, for what purpose I am not sure. I just wanted to have them. I guess I’m more of a packrat than I can admit. Which leads me to my two projects to make sure my kids don’t feel burdened by my ghost when I go. One is, you know all that stuff my Mom did so well? I am terrible at that stuff. But I need to do it. The will, the advance directive, the final instructions. And the other is that lately trendy thing—Swedish death cleaning.

Yeah, I haven’t a drop of Swedish blood, or any other Scando unless you count northern Germany, and even that is murky and uncertain. Apparently we Keefers with our German name are more than half Scotch-Irish, and with about 5% Ashkenazi Jewish; all the rest is nebulously “northwestern Europe.” But living in Minnesota has caused me to aspire to Swedishness by osmosis and so I took a course in Swedish death cleaning. Even though I was primed for this message by my Mom’s recent passing and highly motivated, I am not sure if it stuck. I tried to tackle the biggest elephant in my rooms, my insane book collection, which I paid thousands of dollars to ship to England in 1998, and then paid almost twice as much (after having culled it, ruthlessly in my own mind) to ship it back in 2011. Almost half of my collection is in a storage locker that I can ill afford, and I have a two-bedroom condo, and both bedrooms and the living room are overflowing in books. It’s insane. I do give books away, in amounts ranging from two to 20, periodically, but it barely makes a dent. So I asked Aimee, while she was visiting, to go through my books and tell me if there are any she wants to inherit, and I swear I will dispose of all the rest while I still can, so she doesn’t have to. To my dismay, she said no, she didn’t want to do that, she wanted to inherit all my books and do the cull herself. This is madness. I don’t think she realizes what she’s asking for.

Meanwhile, in addition to Aimee’s daughter, who is in high school in Oregon now, I have just acquired a new baby granddaughter when my son and his wife finally had a longed-for child. My daughter-in-law has a wonderful take on this idea, which was the inspiration behind this article, of building a repository of intangible gifts from elders to descendants. When I think of my mom, and the gifts she gave me (besides, you know, life) all through her life, obviously food looms large. My Mom could cook and sew, and she could paint ceramics and make exquisite little chocolates. Those are the chief of the talents I remember, and she taught me cooking but alas, not sewing. She passed on to me, as well, an ethic of volunteering and being “in community” and a love of country and gospel music. Ashley, my daughter-in-law, asked me for songs, children’s books, memories, anything that I felt my new granddaughter should have as a legacy of our family. I’m sure she has asked the same of my son’s dad. I think this is a wonderful idea, and one that a lot of people overlook, especially if Grandma is right there in town and you can see her all the time. The thing is, especially with people starting their families later in life, Grandma might be gone before your kid is old enough to remember the subtle things she is passing on. Making recordings of family songs and verses, writing down precious family memories, and of course, taking loads of photos and and videos, are a way to use modern technology to enhance our family ties and amass wisdom between the generations. Some years ago I used an online service called Tastebook to create a beautiful bound cookbook of family recipes. Food, as I mentioned before, is a prime communication tool of love in our family. It might be a different area for yours, but there’s probably an app for that.

Even more important in my own project to become a Kindly Ghost, more important than the death cleaning project and equal to the will and advance directive and all that, is to write my memoirs. Writing is the one talent I surely have, and memories and thoughts I have in abundance, and yes, I want both of my granddaughters to know these things. We gave my Dad, who is 92 now and living more or less independently in an Atlanta suburb, a set of journals that have an “app” for recording your aged Ps memories and thoughts. He is supposed to write just one page a day, even if it’s just a sentence or two, and then one of us can transcribe it into the cloud and organize it into a family treasure. Not surprisingly, he isn’t really keeping it up. He has sporadically written a few things. But I fear that mentally, it may be too late already. When I was visiting there a month or so ago, he started telling me an anecdote about his childhood that I had heard before, and some of the details were wildly exaggerated in his memory now, compared to how he told this story in his prime. This served to light a fire under me to get cracking on my own memoirs.

What should you be doing at your particular stage in life? I think family holiday gatherings offer an opportunity to check in with your elders (if you still have some), your kids, your grandkids if you have any yet, and make some family commitments. Share knowledge, but mostly share wisdom. Get the wisdom your elders take for granted, or maybe wrongly assume you’re not interested in. Preserve that wisdom, enhance it with your own, and pass it along to the upcoming generations, along with memories of your love for one another. Make sure your ghost is never going to be mysterious and demanding, like the Hungry Ghosts of Chinese tradition, but is a Kindly One, and wise and still giving, even when no longer present at the table.