To kill the Golden Goose 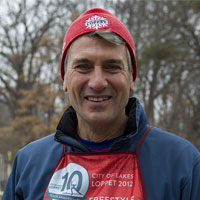 The Park Board continues to threaten to flood the Hiawatha Golf Course.

They want to reduce pumping groundwater out of the golf course into Lake Hiawatha. The golf course in some spots is 2 feet below the water level of the lake. The water level is 2 feet higher in the lake because in the 1960s and ’70s the city and the U.S. Army Corps of Engineers built dams at the outlet from Lake Hiawatha that backed up 2 to 5 feet of water. If they would remove those dams they would eliminate the problem of flooding.

They want to spend $28 million and turn the golf course into a swamp theme park. They think it will be a great natural wonder, and they’re planning a new clubhouse with a first-class destination restaurant.

Some of the old-timers who play golf in the mornings at Hiawatha call it the Cross-Country Conspiracy. They think Rybak and his cross-country ski club—the one that talked the Park Board into tearing up part of the short course at Theodore Wirth and building them a lovely chalet—are behind it all. They egged on the South Minneapolis cross-country skiers and challenged them to knock down the Hiawatha clubhouse, flood the course so it’s nice and flat in the winter, and get rid of golf altogether.

Some people say, “Golf loses money. We should get rid of it.” They don’t say that about cross-country skiing, or softball or hockey or soccer.

For most of its life in South Minneapolis, Hiawatha Golf Course was the goose that laid the golden eggs. It contributed more to the general fund than it spent. But now that it’s not laying as many golden eggs there are Park Board planners and cross-country enthusiasts ready to kill the goose and carve it up. They believe we’ll make more money selling tickets to Camp Swampy in the summer and hot chocolate to skiers in the winter than we now make as a golf course.

They want us to tear down and destroy a beloved and legacy golf course that brings in millions of dollars every year. They want us to spend $28 million dollars to build a swamp nature park and fancy restaurant, and they want us to believe that this will be more profitable and a better use of the space.

I think it would be smarter for us to take better care of the goose we’ve got. The fairways are full of weeds. The cart paths are full of potholes. Hiawatha has suffered from severe neglect.

Isn’t it always best for us to take care of what we’ve got before we go off chasing someone else’s dream? Otherwise, isn’t there the chance we could wake up in a nightmare?