Have yourself a very racist Christmas 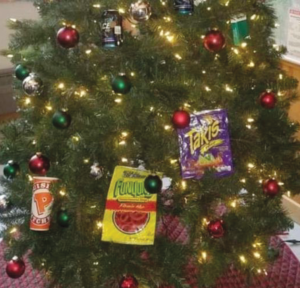 Nothing can spoil Christmas quicker than hate.

And racism is a special kind of hate. It dehumanizes a group, makes them less than human, and allows cops in the Fourth Precinct in North Minneapolis to treat African Americans like trash that has to be swept from the streets.

To celebrate their racism, two police officers added decorations to the Christmas tree on display in their lobby of their Fourth Precinct station: packs of Newport cigarettes, a crumpled bag of Takis chips, a cup from a Popeye’s fried chicken outlet, cans of Steel Reserve malt liquor and some yellow crime scene tape.

“These pieces of trash were deliberately chosen to represent how certain officers feel about the community they serve: that Black people are a stereotype to be mocked and the lives of those they serve may as well be reduced to trash in the gutter,” said Council Member Phillipe Cunningham.

Why did the cops do that?

They thought it was a joke. They thought they were being funny, and they thought every other cop in the precinct would understandstand and appreciate their joke. They obviously didn’t care if their racist joke offended people.

95% of all the cops in the MPD live outside Minneapolis. They come to work like an invading army, to pacify the natives. The station house is their fort in hostile territory.

Remember the 1981 Paul Newman film, “Fort Apache, The Bronx?” Cops stick together, a thin blue line, against the other (us).

There’s talk about moving the station. Council Member Jeremiah Ellison wants to start a community discussion: “For me it’s a question of, is it going to be something that continues its legacy of the fortress, that kind of thing? Or, are we going to do something that the community feels like they drove and made decisions about?”

Tony Bouza picked the site for the Fourth Precinct back in the 1980s when he was chief of police. It was a community center, The Way, that was organized by Spike Moss, the leading black activist in North Minneapolis. It was a partnership between the police and the black community. They believed the station house should be rooted in the black community. It was supposed to be a tool of empowerment. Under the current leadership it is a tool of oppression for our most vulnerable. Officers from the Fourth Precinct killed Jamar Clark, Thurman Blevins and Travis Jordan—lost young men who had not found their way in the world. Their major crime—poverty.

Before becoming chief in Minneapolis, Bouza was the commander in the Bronx. A documentary about his tenure was the basis for “Fort Apache” and, subsequently, the basis for “Hill Street Blues,” the gritty NBC primetime series that ran from 1981 to 1987 for 146 episodes.

I asked him what he would have done about the Christmas tree incident. He said the first thing to do is fire the precinct commander.

To his credit, that was one of the first things Arradondo did. He replaced the precinct commander. That sends a powerful message down through the ranks. Those responsible for racist acts will be held accountable.

But it is troubling and bitterly ironic that the precinct commander was relieved of command for allowing discipline to slip so badly that an inside-the-station-house-racist joke became public, and he was never criticized or disciplined for the actions of the cops under his command who this year killed Thurman Blevins and Travis Jordan.

We probably owe a debt of gratitude to the cops responsible for the racist joke. They told us how it is: “We pick up the trash. We’re Fort Apache, Northside.” They showed us racism is alive and well in the Fourth Precinct.

Good luck with your community discussions on the future of the northside precinct station, Council Member Ellison.

You give us hope in this season of good will.

Maybe something good can come out of this, after all.