Do you want slavery with that chocolate? 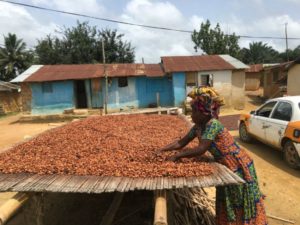 I’m going to assume you don’t. For the past two or three years, I have been on a quixotic quest to raise awareness about the incredible prevalence of child slave labor in the production of chocolate, and the enormous “conspiracy of silence” that leaves otherwise conscientious workers for social justice unknowingly consuming chocolate foods tainted by slavery. If you have done any of the following in the past year, you have probably consumed “slave chocolate” without realizing it:

• Eaten M&Ms, Kit Kat, York’s Peppermint Patties, or any one of many popular chocolate candies (anything available at a movie theatre, for instance)

• Eaten an Oreo or similar cookie, a chocolate chip cookie, or a brownie from any supermarket, including a co-op

• Had chocolate or chocolate-containing ice cream, including most premium brands

• Had a chocolate treat from your favorite local bakery, restaurant or doughnut shop

• Put chocolate syrup on something

In the course of my pursuit of the chocolate issue, I have learned a lot of facts that most people find very surprising. I have also begun to learn the basics of how you can avoid “slave chocolate,” and what some useful organizing tactics might be to raise awareness and make it easier for the average person to avoid it as well. For instance, most people assume that all the chocolate products sold at their co-op or their sustainable, conscientious grocer, such as Fresh Thyme, are fair trade. Most people assume that an organic certification is a guarantee of fair trade. The reason they think this is that about 20 years ago, these were both true, but as Big Ag changed the landscape by, among other things, removing fair labor standards from the USDA requirements for organic certification, the message to the public was very cleverly controlled. In fact, if you read only industry communications on the slavery in cacao production issue, you would think that great strides have been made and it’s not something you need to worry about any more. But if you read the (very rare) investigative articles not controlled by corporations, you learn that nothing could be further from the truth.

Before I dive into the specifics of how to actually, reliably identify fair-trade chocolate, here is a Chocolate 101 Primer. Chocolate is made from cacao, which grows in specific environments, most of which are in what we call the developing world. Except for the recent trend of “bean-to-bar” chocolate (more on that later), most chocolate has been through two separate supply chains before you buy it. The second chain is where a confectioner like Hershey’s, Nestle, Mars-M&M, Cadbury or Ghirardelli; a chocolatier such as Godiva, Russell Stover, or Lindt; or a bakery, or a maker of end products such as ice cream, cookies, or drinking cocoa buys bulk finished chocolate or chocolate components from one of the huge global companies that make these. The first chain is where these huge global companies buy cacao from farmers and make it into finished chocolate and components (cocoa powder, chocolate liquor, cocoa butter, etc.). It’s mainly the market in this first chain where the problem lies. More than half of this business in the first chain is for a single buyer of cacao—Barry Callebaut, based in several European countries. Almost all of the sellers of cacao are little more than subsistence operations, so not surprisingly, the buyers can set the price. This extremely uneven market and other capitalist pressures have created a situation where the world has a huge demand for cacao, and yet the farmers who produce it cannot possibly pay a fair wage at the prices they are getting from the near-monopoly buyers’ market. So a lot of people have to look the other way when the farmers use slave labor to supplement the (theoretically) unforced child labor they extract from their own families. By the way, all of the brand names I mentioned above, and hundreds more, are not fair trade; they all potentially contain “slave chocolate.”

In the industry, the euphemism for child slavery is WFCL, which stands for “the worst forms of child labor.” Fair-trade chocolate is almost a separate industry from Big Chocolate. Since it has to start with the farmers, there are a handful of organizations that set up separate buyer relationships to only buy cacao from farmers they have inspected or to certify their cacao for fair-trade products. They were the original bean-to-bar market, although sometimes the chain went through several steps, but it was all verifiable. The newer trend of artisanal bean-to-bar chocolatiers do all the steps themselves, so there is a direct relationship between the producer and a few cacao farmers. If a chocolatier really is bean-to-bar (and not surprisingly, there are some pricey imposters out there), their chocolate is almost certainly fair trade and slavery free, even if not certified. Just how big is the problem of WFCL? Here are the words from the Slavery Free Chocolate site’s home page (link below):

“Over two million children work in the cocoa fields of … Côte d’Ivoire [and other African countries]. These children are vulnerable to brutal labor practices, including trafficking and slavery. Candy companies—including but not limited to Nestlé, Hershey, Cargill, ADM and Barry Callebaut—have admitted accountability and promised to remedy this situation. Sadly, 14 years have passed since this agreement, and little has changed.

“The candy industry is a $70 billion industry. It should have changed.”

The U.S. Department of Labor publishes an official list of products by country produced by adult forced labor, by child labor, or by forced child labor, i.e., WFCL. The most recent list, in 2017, lists cacao produced by child labor but not forced in Cameroon, Ghana, Guinea and Sierra Leone. It lists cacao produced by child slave labor in Cote d’Ivoire and Nigeria. Tulane University also does a survey of the WFCL situation in the cacao market every five years. Their last report, in 2015, stated that the number of children in WFCL had risen by 13% in the preceding five years.

How then can you know that a chocolate product is fair trade? There are three primary third-party certifications to look for: Fairtrade, UTZ and Rainforest Alliance. In addition to third-party, there are various in-house fair-trade schemes. As all the problematic countries happen to be in western Africa, another assurance is if it is “single-origin” chocolate and the origin country is not African (in fact, there is almost no single-origin chocolate from anywhere in Africa). Unfortunately, there is not a strong culture of labeling chocolate (see organizing ideas below) so for things like cookies, ice cream, local bakeries, it may be necessary to do some research. I have done a small amount and have found three exemplary local concerns: Sweet Science Ice Cream, Totally Baked Vegan Donuts, and Dulceria Mexican bakery all use exclusively fair-trade chocolate. On the national market, Ben and Jerry’s Ice Cream is all fair trade. So this leaves a huge amount of fancy bakery goods and high-priced ice creams that are either not labeled, or, more likely, potentially contain WFCL chocolate. As I said, not all chocolate at the co-op, and not all organic products, are fair trade. A few exemplary brands at the co-op are Tony’s Chocolony, Tchao, Equal Exchange, Endangered Species, Divine, Dagoba, and Alter Eco. (There are others, but read the labels to find out.) Special note about chocolate syrup or sauce— there isn’t any fair trade. You have to make it yourself.

Here is what I think needs to happen for us as consumers to have any impact. The main thing is, we need to speak up. Ask your co-op to commit to only selling fair trade. If that’s too much, ask them to shelve separately and label chocolate that is not fair trade, which will bring the issue to people’s attention. When it comes to their in-house bakery, encourage them to make it all fair trade. Ask them to include a class on the WFCL issue. If you belong to a faith community, start a discussion there. You could have a recurring fair-trade sale to raise consciousness if not money. (Equal Exchange has a program for that.) Again, at least ask people to label their own baked goods at potlucks and events so people know it’s fair trade. If you want to show a film, look for “The Dark Side of Chocolate.” Approach your favorite bakery, doughnut shop, ice creamery, restaurant or caterer and express your commitment to only buy fair trade. Ask them to stock and label fair-trade options, or to join you in that commitment. Among online resources, there are two main websites: /www.slavefreechocolate.org and www.freedomunited.org. An industry journal article as recent as November 2018 at https://bit.ly/2qIKOv7 gives an excellent overview of where we are today and why fair-trade certification in these African countries is so difficult. Lastly, here is a handy checklist of chocolate brands: http://www.slavefreechocolate.org/ethical-chocolate-companies.