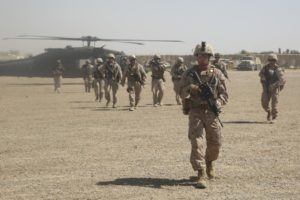 BY WYATT MILLER, FOR THE MINNEAPOLIS PEACE ACTION COALITION

The administration’s announcement and subsequent backtracking reveals an attempt to pull the wool over the eyes of a war-weary public.

President Trump’s announcement in December that he would withdraw U.S. troops from Syria and Afghanistan was met with confusion and criticism from both parties in Washington. A month later, however, it’s clear the question is not “how” the troops will be brought home, but whether they really will be brought home at all.

The president has hinted that troops in Syria will merely be moved to Iraq and continue to be sent on illegal excursions into Syria—or relocated to the Mexican border, to fire weapons into Mexico at civilian asylum-seekers. Airstrikes in Syria have actually intensified since President Trump claimed that troops would be withdrawn. In Afghanistan, new revelations of CIA-trained death squads show that President Trump has no intention of ending America’s war in that country, either.

In recent weeks, administration officials have even sought to put any withdrawal of troops from Syria on hold indefinitely. While the Pentagon claims the withdrawal has in fact begun, it refuses to discuss a specific timeline. It’s clear that war hawks, including voices in both parties but represented chiefly by arch-neoconservative National Security Advisor John Bolton, are working behind the scenes to ensure endless war continues.

Outside of Washington politics, vast numbers of people in the U.S. oppose the wars and militarism. President Trump’s initial announcement of a decision to bring the troops home was a response to this reality. His administration’s backtracking reveals that it was never more than an empty political sleight-of-hand.

The Minnesota Peace Action Coalition believes: The only way wars end is when people mobilize to demand the troops be brought home.