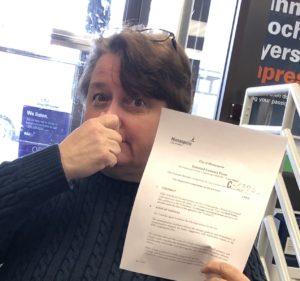 From the Longfellow Forum:

There is no question that there was a public relations contract for the 2040 Plan with the former head of the Republican Party, and that Heather Worthington, the director of Long Range Planning for the City, lied to hide it. The documents are clear.

I went to the Urban Land Institute’s most recent breakfast and listened to Janne Flisrand, who led the Neighbors for More Neighbors group. She talked about how getting the 2040 Plan passed was simply a grassroots effort from people enthusiastic about this plan. But that is far from the truth. The truth is that Minneapolis residents overwhelmingly rejected the first version of the plan. Instead of re-writing it to meet what people envisioned for their city, the Planning Department hired a P.R. firm to sell the plan. Heather Worthington hid this fact by lying when requested to answer whether a P.R. firm had been hired even though the contract was already signed, and the P.R. firm was already on the ground running.

You have to admit, it worked. In the end, they got 12 of the council members to approve the plan even though there was overwhelming opposition. Goff earned every penny they were paid. To the victor goes the spoils, right? The ends justify the means?

Planning is supposed to be about a community dreaming together. About taking the ideas of those that live here and weaving them together into a shared vision. But the Minneapolis 2040 Plan was not this. Instead, we had a small number of people create a plan that most people didn’t want. Instead of changing the plan to reflect what the community wanted, it hired a P.R. firm to sell this unwanted plan. And they were successful.

But that does not make it right. People should be outraged. We deserve a better government than this.