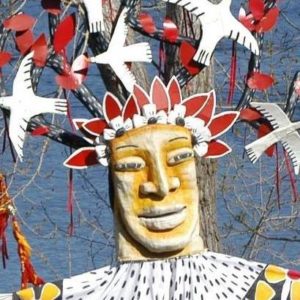 We had another wonderful MayDay parade, ceremony and festival last spring. The creativity of the puppeteers, sculptors, playwrights, performers and other workers continues to be first rate, and our community supports and benefits from this joyful annual celebration.

In the Heart of the Beast Puppet and Mask Theatre, which has kept this community celebration alive for 44 years, has decided that it cannot continue on as they have. You may have heard that this spring will be the last MayDay. Don’t believe it. MayDay will continue, but it does need some attention. The artists and other workers are compensated very little for what they do, and although it is a labor of love, it can also be self-exploitation. I believe that artists deserve a living wage. I supported the orchestra when they went on strike to enforce this principle, and it should be no less true for the artists that labor in the South Side. You might be surprised to know that it costs about $200,000 to produce MayDay, and whether you think that is a lot or a little, it is both hard to raise and not enough. The mayor and several city council members have been quoted as saying they will help. This is both welcome and a source for concern. City money seldom comes without strings.

This is coming at the same time that Sandy Spieler, the founder and leader of both HOBT and MayDay, is stepping down. This year’s parade, the 45th, will be her last in her present capacity. The responsibility will be passed on to a new generation. The new leadership will need all of the community’s support as they migrate the maze of questions.

Should the city help out, or would that endanger the precious independence that has allowed the festival to stay so vibrant? Should corporate money be accepted, or would that be selling out to the enemy, or just accepting reparations from the injuring party? These are not easy questions, and change is hard, and not everyone will agree with whatever is decided.

The city gains a lot from what has been called the Mardi Gras of the North. And a part of me loves it that an arts organization that has not sprung from the minds of the wealthy elite of the city is getting recognized. We have seen the city work to save the Walker, The Guthrie, and the various sports teams. I am not criticizing those institutions, but HOTB and MayDay are different. They are ours, ours as a community. We should support HOTB and Sandy Spieler, recognize the hard work, creativity, integrity and love they have shown us over the last 45 years and step up to insure the future.

Go to the community meetings that are coming up, be constructive, contribute if you can, in money, time, ideas. Talk to the mayor and the City Council, encourage them to get involved and respect the independence and spirit of our festival.