Bonnie Rae says thank you to friends and neighbors 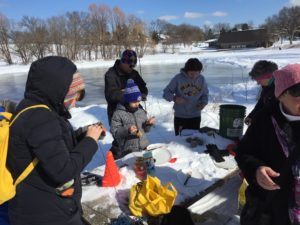 My heart goes out to my neighbors in Powderhorn, past and present, and to all the others who attended the Celebration of Life for John Karrigan on the afternoon of Jan. 19. How can I thank you for all the love and support I felt, and the warmth I still feel when I think back to that day? And to those who helped with the details (photo collage, enlarged bird columns on poster board, speakers).

I apologize that I did not speak to each and every one of you, but I did see some of you out of the corner of my eye; and if you signed the guestbook, I know you were there, and I thank you.

Thanks to Rev. Hans Lee for going along with, and helping to implement, a couple of my unconventional ideas: the Pigs Eye Jass band playing the prelude and postlude, and the secular solo “You’ll Never Walk Alone” (from the musical “Carousel,” by Rogers & Hammerstein). The service was a true celebration of John’s life. And much appreciation also goes to Calvary Lutheran Church for the set-up and hospitality.

In addition, some of you have delivered food to the house which has been a blessing: Moroccan stew, enchiladas, chili, soup, cookies, salads and much more. Others have cleared snow from the public sidewalk in front of the house without being asked.

John lived one block from Powderhorn Park for the past 30-plus years. It was his practice to walk the park several times a week, sometimes mid-morning or mid-afternoon, or both. He was an avid birdwatcher, observer of nature and human habits, wherever he was. After the terrorist attack in September 2001, he wrote how he found comfort in nature. He also applied this healing approach of walking in nature when spending time in his home town (Aberdeen, S. D.), dealing with his aging parents. “Each bird I came across brought me joy.”

P.S. Organized by a former resident of our block, on President’s Day, a number of us gathered at a picnic table by the ice skating warming trailer to assemble bird feeders of peanut butter and seeds on pine cones and toilet paper cores. Then those interested walked to the island to hang them on the trees there.

As John sometimes commented, “We live in a great neighborhood!” So true, John. So true!