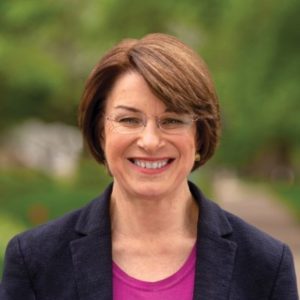 Amy, you stand with the old guard, establishment wing of the Democratic Party.

You are a deliberate centrist. You believe in bi-partisan cooperation. You went on the goodwill tour of Neo-Nazi battalions in Eastern Ukraine with John McCain and Lindsay Graham a couple of years ago just to show how strong a bi-partisan anti-Communist foreign policy we have.

There are two wings to the Democratic Party, and a bird needs both of them to fly. You’re with the right wing, the bourgeois liberals. You’re big on social justice issues but you’re pragmatic and sensible. You love capitalism and you’re beholden to bankers and Wall Street. But if you get the endorsement, we’ll support you. We supported Hillary Clinton after the Convention in 2016.

Bernie Sanders represents the socialist left wing. He wants Medicare for all, free college education, $15 an hour minimum wage and a massive public works program. If he gets the endorsement we expect you to support him.