Spirit and Conscience Love for the Earth 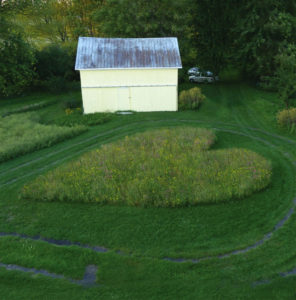 Love for the Earth

Since all the great romantic loves of my life are now either married, dead, or sainted hermits, I decided on Valentine’s Day that my last great love affair will be with the Earth. As my good luck would have it, there was a meeting of MN350’s Solutions Committee that night near my house, so I went there for the “champagne, candy and roses.” One of the other women at the meeting expressed a similar sentiment—she’d had a fight with her boyfriend and thought she’d be better off loving the Earth. (There are quite a few of us in this camp, I believe.)

MN350, according to its website, is a “people-powered organization working to transition to a just clean-energy future.” The number 350 refers to the parts per million (ppm) of carbon dioxide (CO2) molecules we can have in our atmosphere and still have a livable planet. At present the CO2 in our atmosphere is well over 400 ppm. Every year we are adding 2 ppm. The goal is to get it down to 350 ppm before it’s too late. From what I can see, this will take the effort of pretty much everyone in the world.

MN350 has six main campaigns, the most well known being “Stop Line 3,” which is committed to opposing the proposed pipeline, Line 3, in northern Minnesota and across the Mississippi headwaters in order to protect Indigenous communities, Minnesota waters and the climate.

The Solutions Committee is MN350’s newest campaign. At the meeting, the members were just finishing up writing its vision and mission statements. The committee is using “Drawdown: The Most Comprehensive Plan Ever Proposed to Reverse Global Warming,” a NYTimes bestseller, for its source of information on solutions for the environment. Here’s the link to download it: https://www.drawdown.org/.

In the committee’s proposed vision statement, they are envisioning local, sustainable and equitable food systems that, together with other systems changes, will lead to the healing of the biosphere.

In the proposed mission statement, the focus is on food: stopping food waste; encouraging plant-rich diets; discouraging an unsustainable number of mouths to feed; putting regenerative agriculture in place.

The top environmental problems are not “biodiversity loss, ecosystem collapse and climate change,” but rather “selfishness, greed and apathy,” says Gus Speth, an environmental attorney who has worked on environmental law issues since he graduated from Yale in 1964 and who now works for the U.N. The solution, he believes, is a spiritual and cultural transformation. He says scientists can’t do that part.

If such a transformation takes place, the writings of Robin Wall Kimmerer, an enrolled member of the Citizen Potawatomi Nation and a State University of New York Distinguished Teaching Professor of environmental biology, will contribute to it in abundance. She says, in her beautiful book “Braiding Sweetgrass”:

“Whether we are digging wild leeks or going to the mall, how do we consume in a way that does justice to the lives that we take?”

“… the need to resolve the inescapable tension between honoring life around us and taking it in order to live is part of being human.”

“If we are fully awake, a moral question arises as we extinguish the other lives around us on behalf of our own.”

She’s talking about reciprocity: You can’t blithely take and take from the Earth. You have to give back. If the folks who stole the prairies had honored the Earth as Kimmerer does, we wouldn’t be scrambling now to restore and repair our environment. Kimmerer is a resonant voice for many of us.

In “What Does Justice Look Like?” Dakota writer Waziyatawin writes about the irony of returning stolen Dakota land now that it’s been destroyed and polluted. That is heartbreaking. I’ve heard other Native people say that, too. It could never be the full restitution of what was taken.

Descendants of the Industrial Revolution and the culture it created have plundered the Earth. The give and take has not been even. Our over-blown capitalistic culture believes the Earth’s reason for being is to serve human beings.

In other words, our industrial world doesn’t have a reciprocal relationship with nature. Our growth-oriented culture objectifies and uses the natural world to our own ends without regard for the needs of the Earth.

Regenerative agriculture (the fourth goal of the Solutions Committee mission statement) practices an equitable relationship with the Earth. One of its benefits is carbon sequestration, the absorption of atmospheric CO2, one of the main goals of MN350.

The idea of not disturbing the soil too much has been around in a segment of the dominant culture for at least 100 years, and regenerative agriculture is based on and related to many concepts such as permaculture, agroecology, agroforestry, restoration ecology, Keyline design, and no-till or low-till. According to Wikipedia, somebody named Robert Rodale introduced the term “regenerative agriculture” in the 1980s. He felt that aiming for merely sustainable agricultural practices was not enough. Agriculture needed to rebuild the soil rather than just maintain it, hence the new term. As the world moves into crisis mode, regenerative agriculture has moved into the forefront since around 2010.

Sheldon Frith, practitioner and writer in holistic management and regenerative agriculture, has this to say about it: “Almost 100% of Regenerative Agriculture is Organic in the sense that no chemicals or GMOs are used. But Regenerative Agriculture goes far beyond Organic. Regenerative farmers are building topsoil at astounding rates, increasing soil organic matter, sequestering carbon, increasing net calorie production beyond even the most productive conventional farms (and they say we can’t “feed the world,” ha!), increasing the biodiversity of insects, birds, plants and wildlife on their farms, healing riparian areas, reducing erosion and flooding, and producing healthier food.”

It sounds wonderful, but regenerative agriculture farmer Hannah Breckbill from the Center for Sustainable Climate Solutions (CSCS) is alarmed when she reads the Intergovernmental Panel of Climate Change (IPCC) report and grasps that “doing my small work on my 22 acres is not enough.” That is, there is so much work to do and so little time.

I know I’ve presented some frightening information in this article. And I know it’s easier to scare people into bad behavior than into good behavior. So that’s why my primary goal is not to scare you. Rather, I want to promote a positive committee like the MN350 Solutions Committee which is quite aware of the upcoming dangers, yet willing to look for concrete, do-able answers.