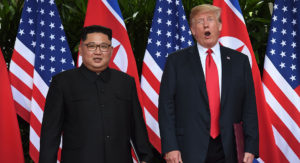 Sometimes, the venue for a meeting can tell us a lot about its goals, such as the aborted one between President Trump and North Korea’s leader Kim Jong-un in Hanoi, Vietnam. As Trump put it, “Vietnam is thriving like few places on earth. North Korea would be the same, and very quickly, if it would denuclearize.” Indeed, Vietnam’s economy is booming at a 6% growth rate, with the U.S. being the top spot for its exports.

A weighty statement! Because North Vietnamese tanks rolled into the U.S. Embassy grounds in Saigon in 1975, leading to the reunification of Vietnam, Americans tend to think that the U.S. lost its war against Vietnam. While it’s true that the U.S. couldn’t retain a dependent client regime in the south of Vietnam, an Asian Guatemala for example, the U.S. did achieve its maximal goal of crushing North Vietnam’s course of independent development outside the control of Western banks and corporations. For example, after 1954, Hanoi had reversed a century of French plunder by pursuing land reform and orienting industry to the needs of its people. It threw off the yoke of being reduced to a supplier of raw materials for Western markets, a path that would have kept the people poor and illiterate.

Although the U.S. departed, its fierce bombing shattered economic progress and left the country so badly damaged that it could barely recover, let alone pursue a course of independent development. Throughout the 1980s, it was one of the poorest countries in the world; to fend off outright starvation, it allowed small markets to emerge.

After it renewed relations with the U.S. in 1995, Vietnam opened up the country to investment from the advanced capitalist countries. Trump stayed at the Marriott Hotel in Hanoi. And no one failed to tell Kim Jong-un that Samsung, a Korean company, has a larger presence in Vietnam than any other corporation.

So here we note a supreme irony: The U.S. “lost” the Vietnam War in 1975 only to see its companies welcomed 20 years later. Vietnam “won” its war against foreign imperialists, but was compelled to roll out the red carpet to them in the form of transnational corporations.

Vietnam’s experience confirms the smashing success of a U.S. goal in the “Neo-Liberal Age” we live in: Unless countries open themselves to foreign capital, especially the less developed ones, their economies will stagnate, be denied modern technology, and grow ever more vulnerable in the jungle of international politics.

Our digression was useful because the U.S. wanted to impress on Kim that no alternative path exists; it serves as a form of leverage to be used against North Korea, the message being: “Either satisfy us on the nuclear question, or lock yourself into backwardness.”

But what does “satisfy us on the nuclear question” mean? After the 2018 meeting in Singapore, although the U.S. officially demanded that North Korea get rid of all its nukes, the U.S. actually seemed to be pursuing the more limited goal of arms control. Trump’s comment that he had ended the nuclear threat from North Korea implied that the U.S. was accepting North Korea as a nuclear power, not unlike Pakistan or India.

North Korea did take specific steps of arms control. It stopped making weapons-grade material, and it stopped testing missiles capable of reaching the U.S. The latter was especially important, because although North Korea had built a missile capable of reaching the U.S., it hadn’t mastered putting a nuclear warhead on it. Without further testing, that couldn’t be achieved, so the testing moratorium was similar to a formal ban on the intercontinental ballistic missile.

In the Hanoi talks, North Korea kept to the path of arms control. In exchange for sanctions relief, it was willing to dismantle its major nuclear complex at Yongbyon. Foreign minister Ri Yong Ho told a news conference that North Korea sought to end only five of the 11 U.N. sanctions, those that hurt the civilian economy. His words are credible, because for years Pyongyang’s default negotiating position has called for gradual changes, with each country taking reciprocal steps, each step being a confidence building move that leads to the next.

So, Trump’s claim that Kim demanded total sanctions relief rings hollow. It obscured what the New York Times called Trump’s Grand Bargain: “North Korea would trade all its nuclear weapons, material and facilities for an end to the American-led sanctions squeezing its economy.”

If Trump thought a North Korean version of the Vietnam model would prove irresistible to Kim, he was sorely mistaken. In exchange for U.S. and South Korean companies moving in, Kim would have to dismantle his sorely won nuclear deterrent, leaving his country defenseless to any future U.S. attack. So Trump reverted to the same nonsense that led to decades of stalemate.

Due to complicating factors, caution is in order here. Looking over his shoulder at the curiously coincidental Cohen testimony, Trump may have taken the standard hard line in order to look tough. Alternately, Jon Wolfsthal of the Project on Managing the Atom contends that the always hawkish national security adviser, John Bolton, added demands at the 11th hour that Kim refused to meet. So we won’t know the full picture for a while.

Fortunately, the talks did not rekindle threats of fire and fury, but progress on a peace treaty and nuclear issues have surely dimmed.