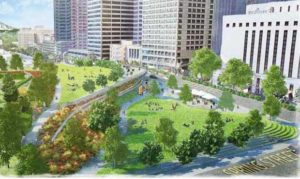 A Southsider weighs in on the Upper Terminal Redevelopment

I recently found out about Minneapolis’ exciting opportunity to redevelop over 48 acres north of downtown at the site of the Northern Terminal on the Mississippi River. The city has approved a $200 million project proposal for the site, which includes parks, housing and a performing arts center. Before the project breaks ground next year, I want to weigh in on the priorities I would like to see the city pursue on the site, given the millions of tax dollars that will be spent.

1) Actual Community Involvement. True community involvement is always worth pursuing, but it is especially important in this case given the historic disenfranchisement of the local population and the systemic injustice this population continues to face. For all the lip service the city has paid to equity in its promotion of the 2040 Comprehensive Plan, its actions thus far with the Northern Terminal site are far more telling and disappointing.

2) Affordable Housing. The most recent plans that I have seen include 100 units of “affordable housing.” I am all in favor of the city building subsidized housing that allows residents to pay only 30% of their income. However, according to the plan, “…the Phase 1 housing component will provide units affordable at 60% of the Area Median Income. The goal is for 40% of units to be affordable at 60% AMI, if sufficient affordable housing funding resources are available.” Area Median Income (AMI) for 2018 is $94,300 for a family of four and $66,100 for an individual. This means that a family of four at 60% of AMI makes $56,600 and an individual makes $39,660. There is no other specific information about what this housing will be, whether it will be for families or for individuals. Nothing prevents the developer from building efficiency or one-bedroom units that are “affordable” to individuals making $39,660 a year and I find this problematic. Affordable housing should serve the most vulnerable people in our city.

3) Reparations. Given the demographics of the community surrounding the Northern Terminal site, it’s appropriate to consider and discuss whether this represents an opportunity to explore reparations through property ownership, geographic reconnection, or other potential methods. In his book “The Color of Law,” Richard Rothstein explores how governmental policies surrounding public housing literally built inequities into our cities that remain to this day. One of the ways this was done was to push low-income whites into programs for home ownership and therefore wealth generation (for example Levittown, which specifically excluded blacks) while simultaneously pushing low-income black communities into high density rental housing, eliminating opportunities for accumulation of equity and therefore wealth, as were given to low-income whites. Another possibility for reparations is the idea of rebuilding connections lost through the building of our Interstate and Freeway system. In this case, building a “lid”* over I-94 between Dowling Avenue North and 36th Avenue North would allow two additional street connections between the existing community and the redevelopment and the river, and therefore any economic gains seen as the site is developed. It could also reduce exposure to pollution and other negative effects of the freeway for community members while increasing the potential green space of the site and existing community.

4) Local Food Production. A preliminary study of potential uses for the site explored the possibility of local, specifically hydroponic, food production but determined that this was of low interest because not enough jobs were created by such facilities. However, last I heard, North Minneapolis is a food desert, and growing fresh healthy food should at least be seriously considered at this site as a means of tackling this problem. Additionally, if we truly care about climate change we should seriously look at this as an opportunity to cut carbon for food transport and to increase our resilience as a city in an uncertain climatic future. For these reasons local food production should be actively pursued by the city even if it doesn’t optimize job creation.

5) Prioritize Carbon Sequestration. Whatever ends up going into this site, the city should prioritize plans that will both preserve carbon sequestered on the site currently and optimize future sequestration in any future developments. What does this mean specifically? In the case of preservation of existing carbon sinks on site, I am speaking about the historic structures, which will also add character to any future land use. The optimization of future sequestration would involve choice of plantings and building up quality soil, especially in areas designated for use as parks/recreation.

The site is large enough that the city could even set up a partnership with local institutions whether nonprofit organizations or schools like the University of Minnesota or some combination of these to study and implement best practices in using vegetation and soil building to optimize sequestration of carbon. This will have the added benefit of improving filtration of rainwater and runoff into the river and could even mitigate future flood damage to the area.

The redevelopment of the Northern Terminal offers an amazing opportunity for the city not just from an economic perspective but also from a perspective of social and ecological justice. Until ground is broken we, specifically the site’s neighbors, can still influence this plan. I hope the city truly engages the community around the site and prioritizes their best interest and that of future generations of all Minneapolitans with the final product.

*They would literally build over the freeway. In theory it would be enough to not only have connections like streets but even parks or more. In Seattle they’re planning to do this over I-5. They use the term “lid.”