A potpourri of unique businesses on Seward’s Franklin Avenue

All of the businesses highlighted this month have been in their locations on Franklin Avenue for more than 19 years, and some more than 40 years. This in itself proves their excellence in their fields, but there is no other discernible trait to tie them together, so we’ll present them in ascending age order.
Art by Kimber. You may have noticed the quirky art studio building at 3020 E. Franklin Ave. as you cruise past on the way to the Franklin Bridge. With echoes of Barcelona, but also maybe a wacky children’s TV program or a Lewis Carroll story come to life, you’d expect it—well, I expected it—to be quite interesting on the inside. But even so, there were some surprises. The designer and owner of the house, and the sole artist of the gallery housed within it, was out of town when I visited, but I spoke to her briefly by phone, then was shown around by her able assistant, Letitia Toribio (who stressed she did not assist with the art), and also two cats, who were also very interesting. 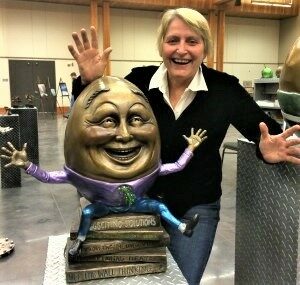 Artist Kimber Fiebiger with a Humpty-dumpty

Kimber Fiebiger, the artist in question, began making sculptures of Humpty-Dumpties in 1982 when her then 2-year old son said, “Make me a Humpty-Dumpty.” These still form the bulk of her artwork, ranging from human-size down to about half that. Many of the pieces use wordplay in the title and posing, riffing on “eggs”—“Waiting to Get Laid,” “Hardboiled Davidson”—or sometimes on “dump.” Or lately, the rhyme with “Trump.” In addition, Fiebiger’s work at Art by Kimber includes some “fine art” pieces, including the award-winning “We the People,” some very classical-looking figures, and expressive figures of mermaids, dancers, etc. And then there is the “functional art”—tables, house numbers or letters, etc.
Fiebiger’s medium is lost-wax casting, an intensive multi-step process for sculpting. All the steps except the actual casting are done in her basement studios (more on that below), and the actual casting is done at a metalworks in Colorado Springs, which is why she was out of town. 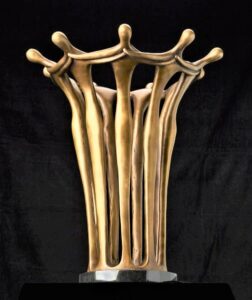 We The People, award-winning sculpture by Kimber Fiebiger

The building that houses all this art and activity is a vibrant entity. Fiebiger bought the building in 2000 when it was just a one-level bungalow with a nice big basement. She immediately began a massive redesign, still going on today, she says, that included adding a second story larger than the ground floor, with curved walls and large windows. That upstairs space is now an imposing three-bedroom AirBnB, which you can view online at https://www.airbnb.com/rooms/4589066. The ground floor includes Kimber’s private living space and several rooms full of art gallery. The basement is perhaps the most impressive of all. Separate rooms are dedicated to the vast array of tools and materials used in lost-wax casting: a woodworking room, a clay modeling room, a wax molding room, a welding room, and a finishing room. The gallery is open most Saturday and Sunday afternoons or by appointment. Check out Art by Kimber’s website and/or Facebook page for more. 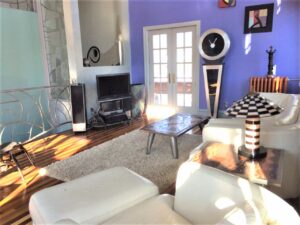 Woodland Stoves and Fireplaces. This is another small business you may drive by all the time and not think what wonders lie within. We visited the store, and again the founding owner, Peter Solac, was not in. We talked briefly with Bob Gau, another sales staff person. He mentioned that a big seller right now was any product for wood-fired or “live fire” outdoor cooking. “So you would say wood-fired cooking is hot?” I quipped. “Well, all of our products are hot … ” he responded in kind. And it’s true! 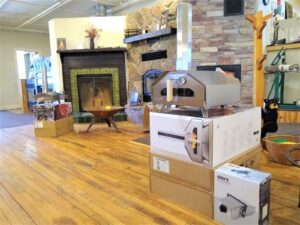 Even if you’re not in the market yourself, you can dream, and these are great products. Wood-burning stoves, fireplaces, fireplace inserts, outdoor grills and ovens, firepits, and all manner of accessories for all of the above are offered, with customization and installation as needed, as well as fireplace cleaning and maintenance. Among the huge array of suppliers are Stûv, Blaze King, Supreme, Kozy Heat, Lopi, Fireplace Xtrordinair, Rais, Morsø, RSF, Jøtul, Hearthstone, Valor, Montigo, Ambiance, Dimplex, and Modern Flame, Planika, and R.H. Peterson for gas logs, Portland Willamette, Wilkening, Stoll, and David Kimberly for fireplace doors, Tulikivi and Isokern for masonry products, and Forno Bravo, Fontana Forni and OONI for outdoor ovens. That last one especially intrigued me—a sleek, portable, affordable outdoor pizza oven that can cook a pizza in one minute, using wood, gas or pellets. I think I know what some family members are getting for Christmas this year. If you’re into firepits but turned off by all the smoke, new technology has made it possible to get a low-smoke version of a firepit with huge dancing fire and almost no pollution. Woodland Stoves has a Facebook page at https://www.facebook.com/woodlandstovesandfireplaces/ (use this link to avoid getting one in England with a similar name). They do not sell online, so drop in and see them at 2901 E. Franklin Ave., where they have been since 1977.
Seward Cafe. We covered the Seward Cafe in depth in 2014 on the occasion of its 40th year in business. At least one of the things we said then is still true—it’s the oldest worker-owned and collectively managed eating establishment not just in the state, but in the country. Founded in 1974 at its current location of 2129 E. Franklin, Seward Cafe has changed somewhat over the years but a lot has remained constant. When we wrote the 2014 article they were less than a year into three big changes—accepting card payments, having a beer and wine license, and serving dinner, staying open until midnight on weekends. In the interim years, the city passed an ordinance mandating a $15/hour minimum wage, a move that the Seward collective completely supported. But the full implementation of that (coming in 2024) in a small worker-owned community-oriented business has meant some changes. The card payment remains, as does the beer and wine, but the ambitious dinner service had to go, along with which the now all-day menu has been greatly streamlined. To be honest, it’s mostly breakfast now, which was always their big strength. The closing time is now 3 p.m. on Monday through Friday and 4 p.m. on Saturday and Sunday. On the plus side, for customers, the Tuesday closings are also now history. I dropped by at midweek for a 1:30 p.m. decadent breakfast (just before the earliest happy hour in the cities, which starts at 2 p.m.), and as a long-time patron (and even a Burger-Bucks volunteer in the early 1990s when they still did that), I can swear that the food is as righteous as ever. Seward Cafe appears to have two separate Facebook pages, both currently maintained and with no apparent conflicts. I have no idea why. One is called Seward Community Cafe. 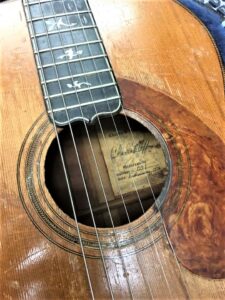 Hoffman Guitars. This is the oldest of the venerable Franklin Avenue businesses, having been founded by Charlie Hoffman, maker of handmade guitars, and Rod Bellville in 1971. For most of that time, it’s just been Hoffman Guitars. There are two main lines of business there—repairing and maintaining all kinds of guitars and stringed instruments generally, and handcrafting steel-string acoustic Hoffman Guitars, which are legendary. Charlie Hoffman has personally made well over 600 guitars, often to order for musicians of note, such as Leo Kottke, Dakota Dave Hull, Tim Sparks, Ann Reed and Willie Murphy. Charlie has kept the store open despite a 20-plus year career as a lawyer, during which time he also continued to make guitars. And his son Gabriel made his first guitars as a teenager and stayed on to help manage the business and hone his own craft of guitar-making. 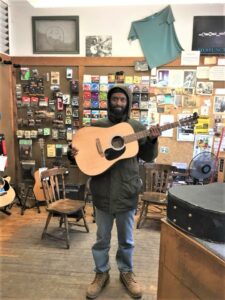 This customer showed such promise at guitar playing that Hoffman gave him a guitar to further his career as a busker.

The guitar shop at 2219 E. Franklin Ave. is by all accounts a very friendly place to hang out, maybe while getting your guitar fixed up, or getting advice on your first guitar purchase. We did not get a chance to talk in person with any of the various Hoffmans and non-family staff who work there, but we did watch an excellent TPT documentary from MN Original (2012), and suggest you watch it too: https://bit.ly/2K9O0LX. Hoffman Guitars also has two current Facebook pages (one without the “s” on Guitars). 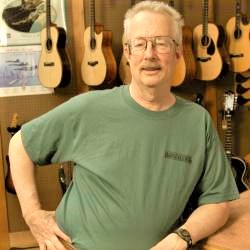