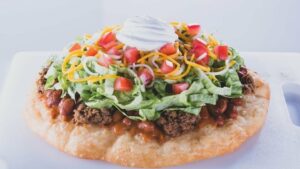 Southside Pride has been running the following in our Phillips/Powderhorn edition and on our website for a long time:
*All Saints Episcopal Indian Mission
3044 Longfellow Ave.
–Sundays 5:30-6:30 p.m.
First Nations Kitchen: Healthy, organic dinners in setting of radical hospitality.
Serving since November 2010! To learn more or to volunteer see our website http://www.firstnationskitchen.org
I had always thought the dinner was only for Native people. But then I met the program director, Chilah Brown, and she assured me it was for anyone and everyone. Radical hospitality, she called it. You sit at tables and are served by gentle volunteers.
So, I went there on a rainy Sunday in June. I didn’t get there on time, but I saw that other people came in after I did and that seemed to be just fine. There weren’t any opening remarks or anything. Everything was very relaxed and casual.
We all enjoyed organic Indigenous food which was stunningly tasty—a bison hotdish, manoomin (wild rice), a spicy cauliflower vegetable medley and sauteed yams (or maybe sweet potatoes) with the skins on and a lovely lettuce salad with strawberries.
Besides a free, friendly, delicious meal, I found the conversation to be almost more of an attraction. It was so intense I can see why the event only lasts for an hour. Brown says conversations sometimes continue from one week to the next.
At my table, a lively discussion got off the ground about all the poets in the neighborhood. Later the group talked about gun violence and then a young man named Frank said something about human imagination and its infinite possibilities. Directing your own mind is probably the greatest challenge in life, but many people don’t actually do that, we concluded.
A woman named Sally was talking with Brown about a PBS special that showed the relationship between Native people and early settlers which led to the development of U.S. democratic ideals and the U.S. Constitution. That’s something I hope to learn more about. As a non-Indigenous person, in a way I felt I was a guest in someone’s home. It was an opportunity for me to learn history and culture from another point of view.
Brown, who is Anishinabe and goes to Augsburg University where she is working on her second master’s degree, says the really great thing about FNK is that despite any historical conflicts, whether between Native and non-Native or among Native people themselves, “we can look past our tribal conflicts, our racial barriers or any social issue that may cause a problem with society or our government, for example, and share our stories with each other.”
All this is tied with healthy indigenous organic food and sustainable practices like composting and recycling. I love the program.
After the meal, on the way out, there’s a table full of breads, fruits and vegetables from which we could take home what we needed.
FNK is a network of partner organizations and teams of volunteers who share the vision. If you’re interested in organizing your faith community, school or affinity group to help at the Sunday dinners, contact director@firstnationskitchen.org, or 612-217-2496.