Republicans: The Key to Better Transit 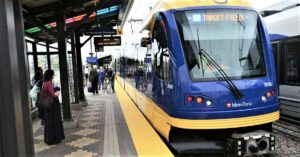 While transit users in the Twin Cities rejoice at improvements such as the new C Line “over North,” many are still annoyed by the thinning out of “plain old bus service,” which has gradually occurred over the past few decades. While the Southside Pride readership area has been spared much of this, what happens in Saint Paul and the suburbs should concern us too, as it impairs our ability to travel. Additionally, it should be remembered that in the 1970s and 1980s, being an MTC bus driver was considered a prestige job. Nowadays, Metro Transit has such a hard time filling positions they had to institute an emergency 1% service cut last year. What happened?
It all comes down to the “F” word. No, not the one you yell out when you realize you’re waiting for the bus at the wrong time because you looked at the weekday schedule and it’s Sunday. The other, more important “F” word: funding. In its heyday, the MTC was well funded by the State Legislature and had the power to levy a dedicated property tax for transit.
Minnesota was a more progressive state back then, but more importantly, even the conservatives in the Republican Party understood the value of a functional transit system to the Twin Cities. The MTC tried to fulfill its mandate, but some of the far-out suburbs just didn’t yet have enough people to support a good bus service, yet they had to pay just as high a tax as the inner cities. So, you had places like Shakopee, where there was maybe a bus or two for rush hour commuters to downtown Minneapolis, but the total they paid in property tax was more than the value of service received.
This led to some suburbs seceding from the MTC service area, forming Plymouth Metrolink, Maple Grove Transit, Southwest Transit, and the MVTA. These separate systems, though leaving much to be desired, have largely been improvements over what existed before. (Plymouth is a disappointing exception—the old Medicine Lake Bus Company was actually better, but I digress.)
Since then, the MTC and its successors, MCTO and Metro Transit, have been in a downhill decline and have fallen into severe disfavor with outer-suburban and rural Republican members of the legislature.
There are two main reasons for this antipathy: first, the allegedly high levels of crime and dysfunction in the Twin Cities; and second, that Metro Transit is “too” Minneapolis-centric.
I know this because I know someone who personally lobbies at the Capitol on a different issue and knows the legislators personally.
Unfortunately, the less funding it gets, the more any transit system has to focus on its most loyal patrons, who, in the case of Metro Transit, happen to be people in or going to Minneapolis. The way to get back the lost levels of service in Saint Paul and the suburbs that didn’t secede is to increase the funding, with an earmark if need be.
The Met Council, which oversees Metro Transit, may need to consider running some demonstration routes to show these legislators what it can do if given a chance. For example, there is currently an express service from various places to the U of M. Perhaps a similar service needs to exist from neighborhoods with concentrated pockets of state employees to the Capitol complex. Additionally, there could be off-peak services aimed at the recreational activities crowd—for example, a bus service direct from the western suburbs to Uptown with no transfer in “dangerous” downtown Minneapolis required—or excursions to high-tourism areas like Stillwater and Excelsior. (Point of history: 100 years ago, Excelsior was a major streetcar destination because of the amusement park and other tourist activities. If it worked then, why can’t it work now?)
My contact who gave me this information suggests that additional funding should be provided by a 10-cent tax on plastic drink bottles. The local transit system should get 5 cents and the public schools should get 5 cents. In areas of the state with no transit, the schools would get all 10 cents.
I’ll raise my Diet Mountain Dew to that!