Many people agree that increasing the housing density of an area will decrease the CO2 emissions per person through increased efficiency. For example, people won’t have to drive as far, or perhaps won’t have to drive at all, because there are more likely to be resources they can access nearby. A 2013 interactive map created by UC Berkley seems to bear this out. In it, zip codes are color-coded based on household CO2 emissions. There is a stark contrast between “green” inner cities where emissions are lower per person (31.6 metric tons of C02 per household annually in my zip code of 55404) compared to our “red” suburban neighbors (70.3 metric tons of CO2 per household annually in zip code 55346 which is in Eden Prairie). https://coolclimate.org/maps.
But is this causation or correlation? The authors of the study that goes with the map warn against depending on density to decrease greenhouse gas emissions, “It would be incorrect to say population density is correlated with lower household carbon footprints.” And, “Given limited technical capacity in cities, we suggest that population density has limited potential and calls for more tailored solutions; which in our view are urgently needed.” https://coolclimate.org/files/coolclimate/Jones-Kammen-CarbonFootprint-FAQ-EST-1-10-2014.pdf
According to this study, income more accurately determines greenhouse gas emissions than density. Specifically, lower-income people generate fewer emissions due to lower consumption. “Higher incomes translate to important social, cultural and economic benefits, but higher incomes also generally correspond with higher consumption and greenhouse gas emissions.” And, “If policies can control for income, or even encourage lower-income infill, then population density has a strong potential impact on lowering greenhouse gas emissions of those locations.” 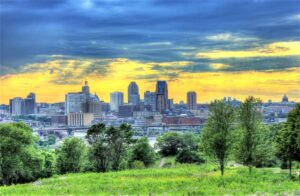 Minneapolis could easily accomplish the goals of equity and reducing our carbon footprint by actively supporting subsidized affordable housing. But the city’s current plan to encourage more market- rate housing in the hopes that it will drive down the cost of housing will not result in lower housing prices. As Alissa Luepke Pier, an AIA-honored architect and Minneapolis City Planning Commission vice president, said in a recent interview, “Let me be clear: Adoption of this policy without adequate safeguards will cause great, long-term harm to low-income families and communities of color, and there is no way to undo the damage once Pandora’s box has been opened.” https://www.planningreport.com/2019/06/17/minneapolis-planning-commissions-alissa-luepke-pier
We could very easily increase our city’s carbon footprint by attracting more middle- to high-income residents, who will in turn generate more carbon emissions through increased consumption of goods. In fact, this will likely lead to a future of “carbon gentrification.” A recent study, which specifically focused on the impact of tech companies on cities, found that, “From the carbon analysis so far, when density results from more high-income residents, the low-carbon benefits of that density get wiped out. We believe the carbon emissions in these neighborhoods are staying the same or increasing.” https://phys.org/news/2019-03-green-carbon-footprint.html
Let me be clear. I think that there has long been room for increasing the density of our city. I have specifically chosen to live in a medium density environment (I live in a townhome with duplexes on either side and an apartment building across the street). But the direction that the city is currently moving in will not create the livable green city so many of us dream of for our future. Specific policies the city could explore to achieve this future would be:
• Implement required density increases such as Portland’s Zone 2.5 in which any new structure built on a standard lot must be two or more units. Prior to the passage of the Minneapolis 2040 Plan this could have been a place where home owners and advocates for increased housing could have worked together. Many home owners have been very frustrated with neighboring houses being torn down and replaced by McMansions. This 2.5 zoning would make it less profitable to tear down existing homes because they could not be replaced by upscale homes, and the former zoning and mass requirements would have eliminated the threat of larger apartment complexes which home owners can find concerning.
• Allow rooming houses again. The city’s current stance against rooming houses needs to change. Rooming houses offer many benefits, from being an affordable housing option to environmental benefits through shared kitchen and bathroom facilities. One of the most cost-effective ways to achieve this would be through the conversion of existing buildings, which would have its own environmental benefits. The city could implement policies in the spirit of the 2040 Comprehensive Plan that would give incentives to preserve existing houses by converting them to rooming houses.
• Remove the requirement to get a rental license if a home owner chooses to rent out a room in a house they live in. Preferably the city would set up resources so that home owners could confidently find tenants and work on incentives to encourage people to take on boarders.
I agree that Minneapolis’ policies should evolve and change over time, and I agree that there are changes that can and should be made now. Our city is at a crossroads. We can deregulate and shut down discussion about what our future should look like or we can work together and find solutions based in science, not profits. Our city has long benefited from the active engagement of its citizens. We need to improve access to this engagement for all residents, not shut down engagement completely.